Arnold Classic 2020 lineup and preview: Who has what it takes to dominate?

With the official lineup in place and the Arnold Classic 2020 coming up fast to kick off the unofficial start of the bodybuilding season – we’re breaking down the top contenders with predictions on what to expect and who will likely stand tall in the top of the pack for each division.

First we’re breaking down the Men’s Open division. Check out the official lineup and our analysis below. 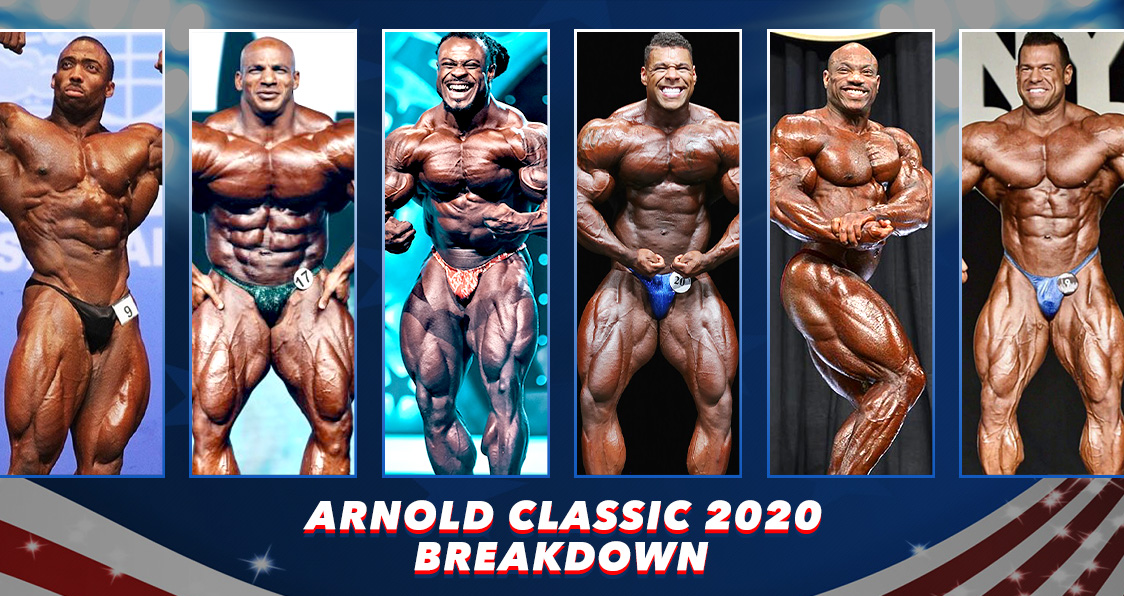 The French bodybuilder who could rival Big Ramy in shear size, Morgan Aste is an absolute beast who tips the scale at nearly 300 lbs. With so many veterans contending on stage, Morgan Aste will have to utilize his size and height to truly stand out among the crowd.

After taking sixth at the 2018 Arnold Classic, Lionel Beyeke is looking to make his return to the stage and he’ll certainly have his hands full to say the least. Beyeke has the right proportions and size to contend with the best of the best on stage. What he’ll need to do to perform at a high level is make sure his presentation is impeccable in order to properly showcase his incredible physique at the Arnold Classic 2020.

With his recent impressive showings including taking second at the 2019 Olympia, William Bonac is no doubt the favorite to win the show. His impressive musculature and lines have helped him in the past and will be key to his success. Bringing a bit more size could do William Bonac well and perhaps help him fend off the returning Big Ramy.

A truly impressive bodybuilder with some pretty stellar size to his physique, Maxx Charles has what it takes to shock people at this event. If he can put on an impressive show and highlight his, arms and back, Maxx Charles has a good chance at cracking the top ten at the Arnold Classic 2020.

Legal issues kept Nathan De Asha from competing for much of 2019. Now he makes his return hoping to recapture the attention of the masses. With a great deal of potential and some impressive definition, Nathan De Asha will have to bring a more impressive midsection to prove he’s the best of the best at the Arnold Classic 2020.

Taking time off after his less than ideal performance at the 2018 Olympia, Big Ramy is making his return to action and is looking to reclaim his spot as most imposing bodybuilder in the world. While he may have the size, Big Ramy has lacked the symmetry and balance you want to see from a top competitor. From his recent photo updates, Big Ramy appears to have fixed many of those issues and could be definitely find himself in the top 3 or potentially winning the show.

With this being his final year of competition you can expect Dexter Jackson to bring his absolute best to this year’s Arnold Classic. As the most winningest Arnold Classic competitor at the show, it would be poetic for Dexter Jackson to pick up one last win. He’ll have to overcome the bicep injury that held him back at last year’s show and perhaps give the posing performance of his career to sway the judges in his favor.

If there’s one thing you can be sure to expect from Johnnie O. Jackson, it’s that the veteran will bring a massive amount of intensity when he steps on stage. Known for his impressive training sessions and his ability to bring raw energy and passion to the stage, Johnnie O. Jackson may not be a front runner at this show, but you can expect him to bring an explosive performance to the stage to entertain the fans.

Steve Kuclo has been maintaining his top 10 status since returning to action in 2018. Since taking a few years off and dedicated the entirety of his time to competing, Steve Kuclo has been looking more impressive with every passing show. Could he break into the top 5 at the Arnold Classic 2020? It will be difficult but it’s certainly a possibility considering the steady improvements he’s been making.

After overcoming a brain tumor diagnosis and in full recovery, Josh Lenartowicz is looking to make an eye catching comeback and show that he has what it takes to reclaim his position among the top 10 ranks.

A true veteran who you can never count out, Victor Martinez is still in great condition heading into the Arnold Classic. While he may not be in his prime, Martinez is certainly dangerous enough to keep the bodybuilders in the top 10 on their heels. Expect Victor Martinez to come in a respectable 6th or 7th place.

Former Arnold Classic champion Cedric McMillan has a lot to prove at this show. With a very balanced and symmetrical physique coupled with some impressive size, Cedric McMillan has a classic bodybuilding silhouette that will capture the attention of the judges. Conditioning will be key for McMillan in this show as it’s been hit or miss at recent shows. If Cedric McMillan can come in good condition as well as showcase an inspiring posing routine, he could certainly steal a victory right from under the other front runners at the show.

When you’re given the opportunity to train with former reigning Olympia champion Phil Heath, there’s no doubt you’ll get an added boost. Patrick Moore has all the tools to win this show with some truly impressive genetics and a well proportioned physique. There’s no doubt that everyone at the show has their eye out for Moore who is steadily becoming a threat in the Open Weight division. Perhaps a memorable posing routine could be just what he needs to secure victory at the Arnold Classic.

Sergio Oliva Jr. has all the potential in the world to out perform the competition at the Arnold Classic. With champion level genetics and a work ethic to bring out that potential, Sergio Oliva Jr. has what it takes to rival the top of the division. If he’s able to bring great presentation to his game it could be all he needs to place in the top 3 at the show.

After placing 9th at the 2019 Olympia it’s clear that Akim Williams is making improvements to his game. He’ll have to bring his trademark size and indomitable attitude to impress the judges in Ohio. If he can replicate his performance at the Olympia we could see Williams potentially crack the top 5.

Stay tuned as we continue to break down the other divisions including Classic Physique, Men’s Physique, Men’s 212, and more in the coming days as we count down towards the Arnold Classic 2020.

Here are the listed competitors for the remaining divisions: