Kirill Tereshin will have to undergo surgery to have substances removed from his arms.

Kirill Tereshin, an MMA fighter from Russia, has been better known as the ‘Russian Popeye’ because of his freakishly large biceps. This work has not been done naturally and Tereshin could risk death if the large amounts of jelly in his arms are not removed.

Tereshin has been stuffing his arms with oils and petroleum jelly to get the mass that he has shown. The substances are meant to harden inside the skin and stretch into great size. This is not the first time that Tereshin has had problems with his arms. 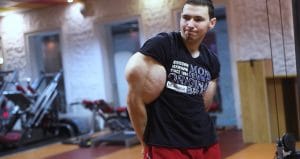 In March, Tereshin underwent a surgery to have some of the oils removed from his arms. It might seem like a silly choice to begin with but Tereshin was focused on adding size and did not think about the long-term effects.

Kirill Tereshin was a featured subject in “BIGOREXIA”. The film was a documentary exploring the psychological condition known as Muscle Dysmorphia – or Bigorexia. It’s a condition where no matter how large a person becomes (whether it’s fat, muscle, etc), they believe they are too small. So they go to extreme lengths to keep adding on weight.

Tereshin was featured for his use of synthol to artificially expand his muscle. This is an oil that hardens inside the body and can create cartoonish looking muscles — like the biceps of Tereshin. He was filmed in Russia and interviewed about his lifestyle and mindset using synthol.

Alana Mamaeva, who is a leading campaigner against cosmetic surgery abuses, advised Tereshin to have the large amounts of jelly removed from his arms in an attempt to save his life. These have become poisonous and could do more damage than just impact his arms.

Kirill Tereshin will have to go through many procedures in order to save both his life and his arms. This can be used as a lesson for young bodybuilders in the beginning stages.