The 2021 Olympia is setting a prize money record.

The 2021 Olympia is setting a new record with an enormous $1.6 million prize across all divisions. Athletes will have the opportunity to take home a tremendous amount of money, money that can change their lives.

Professional bodybuilding has never been known for having the best prize money, particularly in the beginning of the sport. In recent years however many shows have been improving their payouts to athletes. The Olympia show has done well to improve their payouts for competitors. With every passing year the payment situation has been improving and 2021 is no exception.

Following their trend of increased prize money, the 2021 Olympia is defying all expectations. This year the show will payout $1.6 million over all divisions. It’s an opportunity to change a great deal of lives for these Olympian athletes.

Below the official Olympia Instagram released this statement about the record setting prize money.

Olympia owner Jake Wood and Chief Olympia Officer Dan Solomon have confirmed the prize money for next month’s Olympia Weekend. With full details coming soon, the total prize purse will be the largest ever awarded in the history of bodybuilding, fitness or physique competition. Set for the weekend of October 7th-10th, the fitness industry will gather in Orlando, Florida with the sport’s most prestigious titles on the line.

Sanctioned by the IFBB Professional League, the event is expected to be completely sold out. With more than 230 professional athletes expected to compete in 11 divisions, the 2021 Olympia will have more sponsors than its had in the 57 year history of the event. Plans also include a new & improved press conference, an expanded expo, along with a jaw-dropping stage production, unlike anything this sport has ever seen. 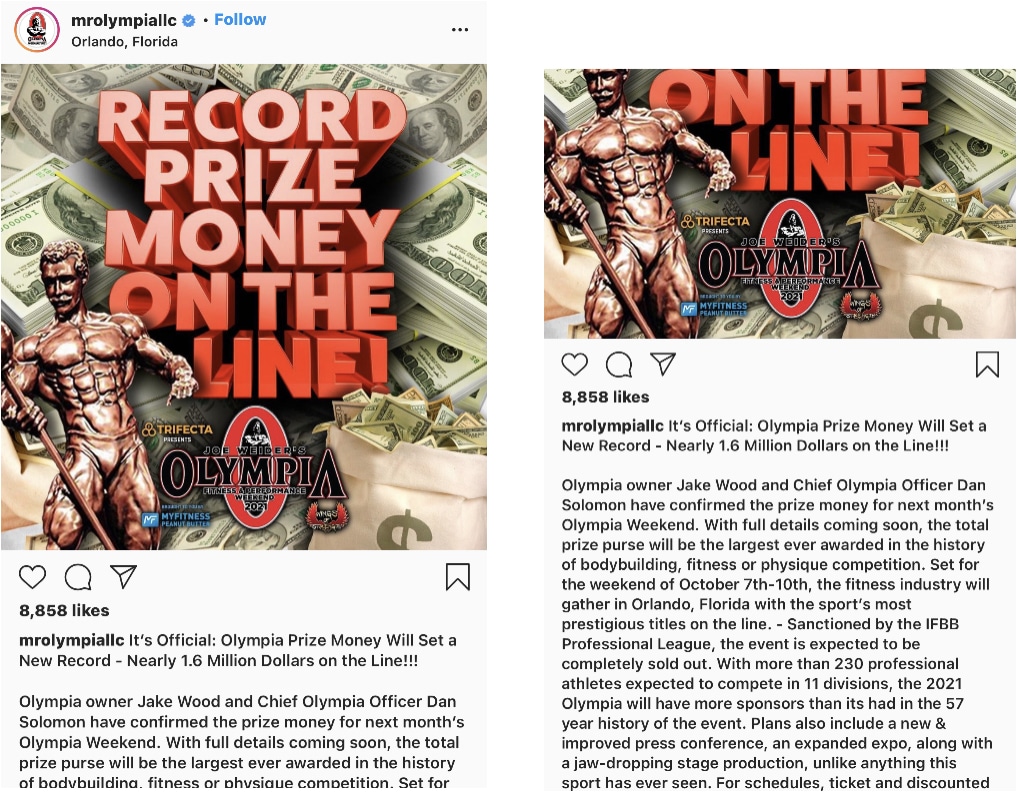 This comes as a pleasant surprise. Prize money issues have plagued the sport for some time. It’s great to see that Olympia owner Jake Wood and Olympia Chief Olympia Officer Dan Solomon are pushing hard to increase the purses at the biggest bodybuilding show in the world. It’s a great sign of things to come.