Could probiotics change the game?

Everyone knows that the digestive tract is one of the most important structures in the human body – not just for digestion itself, but for immune strength, endocrine stability, the list goes on.

It’s also well known that the types of bacteria found in the human gut are a major player in it’s health or lack thereof. Almost every culinary culture on earth has a form of traditional probiotic, be it sauerkraut, ogi, kimchi, or yogurt. But now, research suggests that different colonies of bacteria can actually explain different dispositions towards body mass index.

The basic idea behind probiotics is this: in order to keep ‘bad’ bacteria colonies from growing, we constantly replenish our body with ‘good’ bacteria, which populate in our gut and consume resources that would otherwise be available for the ‘bad.’

The good bacteria form a variety of critical functions. They help the immune system to break down toxins, produce essential vitamins, protect against dangerous infectious organisms, and help break down food.

Every human being has a different ‘microbiome,’ (microbial ecosystem) in his digestive tract. Some of these microorganisms excel at certain tasks, such as at degrading food.

If these results are replicable in humans, we could soon see probiotics designed specifically for weight loss or gain.

This is a fascinating and provocative discovery, which could account for interpersonal dispositions to different BMI’s that were previously attributed to generic empty terms like ‘metabolism.’ 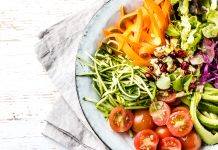 Want To Ditch Meat? Tips And Tricks On How To Convert To A Plant-Based Diet