Former UFC champion Chuck Liddell was arrested on charges of domestic battery, claims he was the victim.

UFC Hall-of-Famer Chuck Liddell was arrested on Monday morning in Hidden Hills, CA around midnight on a misdemeanor charge of domestic violence.

Lost Hills officers responded to a call regarding a family disturbance that involved a physical altercation between Liddell and his wife. He was taken to the Lost Hills Sheriff Station where his bail was set at $20,000. Liddell was released on Monday morning at 10 A.M. local time.

On Monday, Liddell released a statement on Instagram claiming that he was the victim. Liddell says he sustained bruises and lacerations following the incident.

“Last night the Los Angeles Sheriff’s Department deputies who responded were professional. While the information about the case will be revealed in due course, I believe it is important to convey and clarify a few facts about the situation,” Chuck liddell wrote.

“I was the victim of the incident last night at our family home, as details of the case will reveal. The deputies informed me that my wife would be arrested, as I did not respond to her assault while I sustained bruising and lacerations. I volunteered to go in her place.

This was one of the Manu times I have tried to shield a family mental health issue from the public purview. It has become painfully apparent that this cannot continue, as our private life has not reached a public breaking point. Please respect our privacy as I help to navigate our family through this difficult time.”

Chuck Liddell claims that the details of this incident will be revealed in due time. He has a court hearing scheduled for Wednesday in Van Nuys, CA.

Liddell was one of the early stars of UFC during its takeoff and is one of the highest pay-per-view draws in history. He headlined 13 events and last fought in 2010. Liddell is the former light-heavyweight champion who was inducted into the UFC Hall of Fame in 2009. 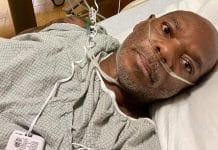