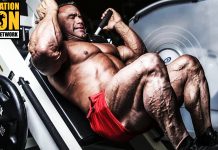 This could be the end of an era.

Anyone who has tuned into a bodybuilding competition in the last several years will undoubtedly know the name Dennis Wolf. A German bodybuilder with a crazy physique and a huge fan following, Dennis Wolf was one of the most impressive competitors in the modern era.

Now it seems that could all be coming to an end. In a recent interview provided by RepOne, Dennis Wolf hints at the possibility that he’ll be retiring from competitive competition.

In the video, in his native German, Dennis Wolf discusses how he needs to undergo a number of surgeries and that he’s content with being at a lighter weight. He also discussed how he’ll have to get used to looking at himself in the mirror at a smaller size and being okay with it.

Those statements alone indicate that Dennis Wolf could be out of the competitive bodybuilding game for good.

While the video is in German, there are options to switch the closed captions to English. The translation is rough so you’ll have to interpret a bit, but there’s no denying that Dennis Wolf appears to be preparing himself to make an official announcement of his retirement.

Stay tuned to Generation Iron for more on this developing story.