UFC Star Jon Jones falls into yet another controversy with another arrest.

UFC star Jon Jones was arrested Friday morning in Las Vegas according to a report by ESPN. Jon Jones is an often controversial but wildly popular MMA fighter who was also featured in the theatrical documentary The Hurt Business.

Jon Jones is being charged with a misdemeanor battery domestic violence charge and injuring or tampering with a vehicle. This charge is deemed a felony according to officer Larry Hadsfield of the Las Vegas Metro Police Department – who spoke with ESPN for the story. Jones is currently being held at Clark County Detention Center. He is scheduled to first appear in the Las Vegas Justice Court this Saturday at 1:30pm.

According to the initial report, Jon Jones was arrested at 5:45 A.M. Friday at a resort near Las Vegas Boulevard. Jones adviser, Richard Schaefer spoke with ESPN – stating,

“the facts are still developing, we really don’t know yet the full story so I’m not going to make any comment until I have a chance to talk to Jon and until we see how this plays out.”

Jon Jones is known as on elf the best UFC fighters in the history of MMA. He had held the UFC title for nearly nine years and was never truly beaten in the octagon. His only official loss was via a controversial disqualification.

While very popular and legendary in the sport, he is also just as notoriously known for his past controversies. Most notably, Jones was involved in a felony hit and run arrest and had failed two drug tests in his career.

After some time out of the spotlight, Jon Jones was set to make some sort of return as a heavyweight – wanting to add yet another title to his impressive collection. Just one day before his arrest, he had spoken with ESPN stating that he was weighing in at 255 pounds and was looking to bulk even further – to 270 pounds for his heavyweight debut.

This story is still developing. Generation Iron will continue to update as more information becomes available. 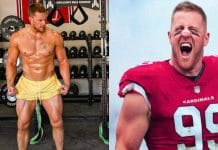