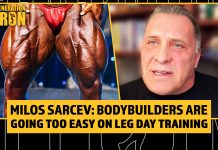 In a recent video published by Dexter Jackson on his social media channels – he powerfully defended the concept that a bodybuilder does not need to train extremely heavy to be successful. This is a far cry from the likes of Ronnie Coleman whose size was matched by his immense strength and love of lifting massive heavy weight.

The battle of heavy training vs volume training has existed for as long as bodybuilding has become popular. So which is the better training method? The truth is both – depending on your goals and your genetics. But that’s a deceivingly simple answer that doesn’t provide much guidance when you are a hungry athlete looking to maximize your training as quickly as possible.

That’s why King Kamali is here with a new episode of King’s World that breaks down these two training methods in detail. The goal is to give you a most focused view of each training style and hopefully help you decide which is best for you. King Kamali also reflects back at the top legendary pros in each training style – showcasing that both training methods can find you a place in the history books under the right circumstances.

So should you go heavy or go light? Find out in this week’s episode of King’s World above!