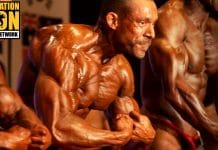 King Kamali breaks down what he thinks are the most influential people and moments in all of bodybuilding history.

Bodybuilding is forever changing and each era has its own key elements that make it stand out. It’s also been steadily growing since the early days of bodybuilding and the invention of the Mr. Olympia competition. Just looking at the size of the Olympia year after year is proof of how far the sport has come throughout the decades.

But change doesn’t come out of nowhere – it’s caused by key players and figures throughout the history of this fine sport. Moments that forever changed the sport and how it’s progressed. That’s why King Kamali is breaking down his picks for the top 10 influencers in bodybuilding history. This includes people and moments – both on and off the stage – that have changed the sport of bodybuilding forever.

There are so many spectacular moments throughout the entirety of bodybuilding that it might be hard to simply keep it limited to just 10 things. Do you agree with the picks King Kamali has made? Or are there other people and moments that seem more important in your take on the history of bodybuilding? Check out the new episode of King’s World above and let us know your thoughts!