Victor Martinez plans to back the new project during its opening weeks.

Victor Martinez has found success on stage as a bodybuilder in the Men’s Open category. His incredible physique was enough to make an impact during competitions and could be used to spark some creative ideas in other art forms as well. This is especially true of a kickstarter that Martinez will be promoting.

Victor Martinez inspired a character in a new graphic novel written by Jonathan Naranjo. Shadow Syndicate Chasin File is a project that will be released by Flamewrite Entertainment. Naranjo created the story with intentions to raise money for a good cause. The money raised from this project will go toward Mental Health Awareness to support men and women in uniform.

This is a cause that Martinez wanted to get behind. He posted a recent video to explain his plan to get on board.

“The whole thing why he wrote it was to help a lot of mental health, anybody who is suffering from mental health. The men and women in uniform. Please check out the kickstarter. Please support this film, this script. The graphic novel — you will be entertained, you will be supporting a good cause. Let’s get this out there. Let’s get it financed and support it,’ Victor Martinez said.

The initial goal of this is to raise $30,000 to help different families. Once this goal is reached, there will be stretch goals of up to $100,000 so that many families can be helped. Naranjo was impacted by losing the mother of his children to PTSD/depression. She served in the US Army. Naranjo is now raising awareness for this very special cause.

The graphic novel will eventually be turned into a movie. The story is led by Colonel Chasin. He is the head of a team of special ops soldiers who are ordered to seize control of an underground city of ruins from a band of terrorists. The two forces unleash the long-buried secrets but discover that divine powers have wills of their own.

Victor Martinez has decided to promote the graphic novel because of the cause it is for. Martinez is a well-known bodybuilder whose career has spanned close to two decades. Martinez began competing professionally in 2001. He has victories in some top shows such as the Arnold Classic and Tampa Pro. Martinez has appeared in 11 Olympia competitions over the course of his career.

In 2007, Martinez finished as runner-up in the Olympia to Jay Cutler. This was his second straight finish in the top three. Martinez made a return during the 2020 Arnold Classic, where he finished ninth. This was the last time he stepped on stage professionally.

The project was launched in October and will continue through the month of November. This is in hopes that it can reach its goal and even go beyond. Victor Martinez is one of the promoters that will do what it takes to make that happen. 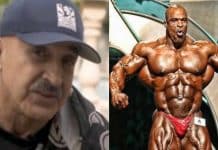