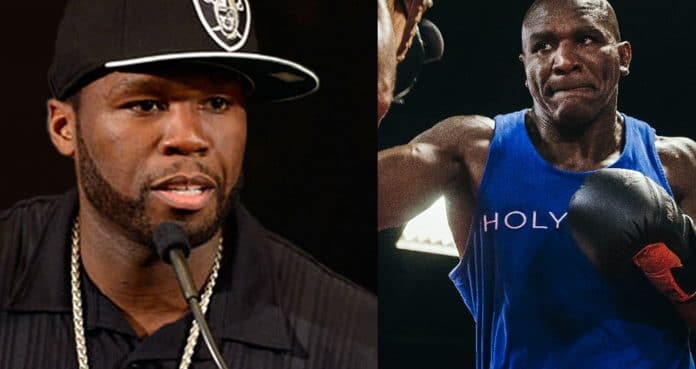 50 Cent joins a long list of star names set to comment on the Holyfield Vs. Belfort fight.

As reported by TMZ, 50 Cent will be joining coverage for the big event. But before you get excited about the idea of 50 Cent and Donald Trump side by side – the hip hop star will be on a different broadcast than the former President of the United States. According to TMZ’s sources, 50 Cent will be filling in for Snoop Dogg’s usual color commentary role.

While some fans may miss the often funny commentary from Snoop Dogg, 50 Cent is also a huge boxing fan known for his strong comments and antics. So we can expect the broadcast to also be entertaining and memorable for this big face off.

Even though Donald Trump won’t be sitting next to 50 Cent for commentary – the former POTUS won’t be alone on his broadcast. He will be side by side with UFC star Jorge Masvidal and Donald Trump Jr. It should be noted that Masvidal had previously been on the campaign train supporting Trump in Florida during the lead up to the election.
Alongside Donald Trump, Don Jr., and Masvidal – longtime play-by-play commentator Todd Grisham will also be providing analysis for the match.Ultimately, it seems that fans will not have a lack of options for the Holyfield vs Belfort boxing match. Whether or not you listen to 50 Cent’s possibly fun broadcast or choose to see what Donald Trump has in store will be a tough call. One thing is certainly sure – neither of these two commentators will be short for words during the proceedings.

Originally, Vitor Belfort was set to face off against Oscar De La Hoya. But due to La Hoya receiving a sudden COVID-19 diagnosis, Holyfield, who was already preparing for an upcoming bout, stepped in last minute to fight the MMA star.

When it was originally De La Hoya vs Belfort, it was already a controversial fight. La Hoya, one of the most popular boxers of the last three decades, is 48 years old. Belfort, the once-dangerous UFC light heavyweight champion, is now 44. But now that the fight has shifted to Evander Holyfield – the match has become even more shocking. Holyfield, one of the best 10 heavyweight champions in the history of boxing, is 58 years old – and hasn’t had a real fight in over 10 years.

Needless to say, the fight will be an interesting one and something that will be remembered for the history books. It will all unfold later tonight – we can’t wait to see what the ultimate outcome is.