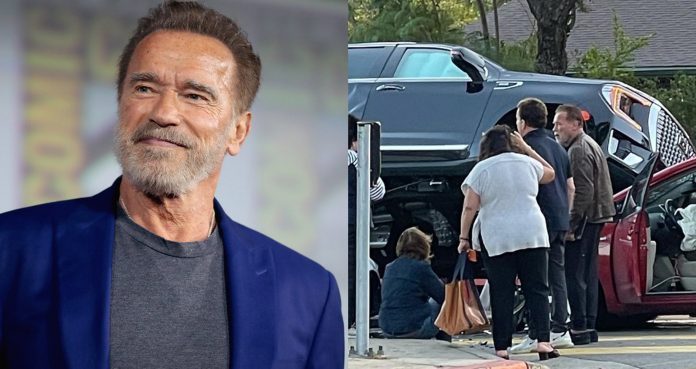 Arnold Schwarzenegger provides fans an update after getting into a serious car accident.

It’s been reported that Arnold Schwarzenegger has been involved in a very serious car crash in Los Angeles. Schwarzenegger, 74, was driving his GMC Yukon SUV on Sunset Boulevard upon crashing into a Red Prius on Friday, January 21st, 2022. Reports indicate that the driver of the Prius was badly injured. The accident was strong enough to cause the Prius airbags to be deployed upon impact. No arrests were made in the case.

Arnold Schwarzenegger was able to give fans an update this morning. In a statement issued by his representatives, Schwarzenegger is doing “fine” and was more concerned about the condition of the woman in the Prius.

“He [Schwarzenegger] is fine, his only concern right now is for the woman who was injured.”

Shortly after the accident, images of the crash went viral on social media. The photos contained images of Arnold Schwarzenegger’s SUV rammed directly into the Prius. Despite the accident appearing to be Schwarzenegger’s fault, no arrests were made at the time of the crash. The woman in the Prius was immediately taken to the hospital in an ambulance.

Eyewitnesses further confirmed the account in the original police statement noting that both cars were making a turn in the opposite direction when the crash occurred. While we and the bodybuilding community are certainly glad that Arnold Schwarzenegger appears to be free of injury – our well wishes also go out to the woman driving in the Prius. Hoping for a successful and speedy recovery.