Bobby Thompson took to Instagram to show off some recent progression he has made for his next event.

Bobby Thompson has been turning heads for awhile. Now, he is beginning to take it up a notch. On Wednesday, Thompson posted a video on Instagram showing him crush a partial deadlift of 455kg (1,003lb) off 15-inch blocks.

Thompson placed ninth back in June during the 2021 World’s Strongest Man competition. This was his first and certainly will not be his last. Next up is the 2021 Shaw Classic, which will be held from Aug. 27-28 in Estes Park, CO.

By the looks of the video below, Thompson’s preparation is going very well.

In his caption, Bobby Thompson hints that he has not been feeling his best lately and his diet is not what it needs to be. If that is the case and he can still pull off a lift like this, then it will be interesting to see what he can do at full strength.

“Feeling decent atm, past few days were a little longer than expected and diet has been off but I’m still climbing. Solid prep for the @theshawclassic in the works.”

Bobby Thompson currently holds the American log press record of 217.5kg (478.5lb). He accomplished this on April 30 during Anthony Fuhrman’s Clash on the Coast. Now, it looks as though Thompson could be interested in setting some more records this year.

This lift for Thompson is considered a partial deadlift because he is not picking the weight up from the floor. However, he is using blocks that are lower than what they have been during strongman competitions. During the 2020 World’s Strongest Man and 2020 Shaw Classic, a partial deadlift was performed off an 18-inch block.

Bobby Thompson is not shy about showing off some of his incredible feats on his Instagram page. He has posted videos showing off his preparation in specific lifts like deadlifts, squats, and log lifts. At this year’s Shaw Classic, Thompson will compete with Brian Shaw, who won the competition last year, and Zydrunas Savickas.

The all-time partial deadlift record is held by Anthony Pernice. He set this mark in 2020 with a lift of 550kg (1,212lb). With the height of the blocks Thompson has used and his ability to perform it twice, there is a chance is he prepared to do something special at his next event. 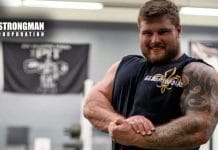