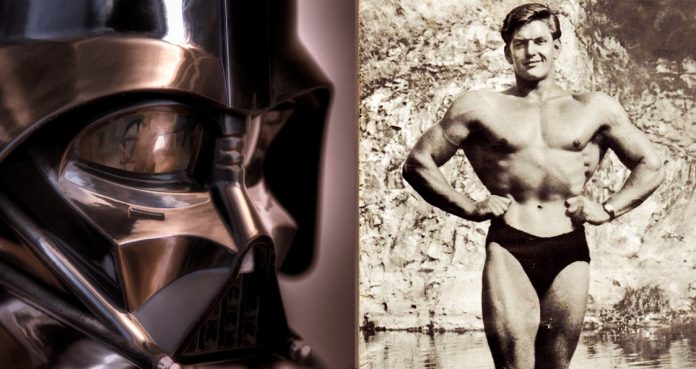 In honor of Star Wars Day, we are republishing our editorial piece of the body behind the Darth Vader suit. David Prowse was a former bodybuilder who brought a small connection between the world of bodybuilding and the world of Star Wars. Original story follows below.

Many people often ask the question of whether or not bodybuilders can make it into popular culture. It’s something that has been a constant since Arnold Schwarzenegger’s star making role in the classic bodybuilding documentary Pumping Iron. The movie propelled Arnold from talented bodybuilding champion to the man he’s become today: actor, politician, and generally an all around successful entrepreneur.

It’s truly an astounding accomplishment especially when considering most bodybuilders never end up securing crossover success. But did you know there was a bodybuilding connection to Star Wars in the form of actor David Prowse?

For many people bodybuilding is such a niche sport that the likelihood of turning from an athlete who poses on stage in a pair of trunks into a celebrity hailed worldwide is highly unlikely. But with the advent of the internet the general public is learning more and more that the trend of turning from bodybuilder to Hollywood superstar wasn’t so far fetched. In fact, it seems like it was one of the many avenues that current Hollywood royalty utilized to attain fame and fortune.

Actor David Prowse during his bodybuilding years (above).

Besides Arnold Schwarzenegger, Sean Connery was a man who broke into acting through being discovered at a bodybuilding competition. You could say that there would have been no James Bond without bodybuilding (though that could be stretching it a little bit). But Connery wasn’t as seasoned a competitor as Arnold was. But before the Austrian had the opportunity to become a household name with his portrayal of the T-800 in The Terminator, there was another accomplished bodybuilder that reached the silver screen to great acclaim.

The man within that black leather suit was none other than former bodybuilder David Prowse. When people think of imposing figures in everyday life they think of a massively muscled and particularly tall individual. When looking for someone to play Darth Vader the producers needed a man who could be a terrifying physical presence and they found that in the bodybuilder Prowse.

Prowse’s physical presence was as important to making Darth Vader as memorable a presence on the big screen as James Earl Jones’ voice was to breathing life into the dynamic character. The combination proved to be beneficial to the franchise and made Darth Vader one of the most recognizable and popular characters to ever hit the silver screen.

Jones made have had the voice, but it was a bodybuilder inside the suit that help made Vader into one of the most beloved characters in film history. Too bad in the end only the mask comes off – and we didn’t get to see any of that powerful muscle.

Sadly, David Prowse passed away in 2020 at the age of 85. But the way his bodybuilding lifestyle contributed to one of the most enduring pop culture and movie franchises of all time will always be remembered.

Know of any other bodybuilders that used their massive muscle to become film stars? Let us know in the comments and forums. Also, be sure to follow Generation Iron on Facebook and Twitter.