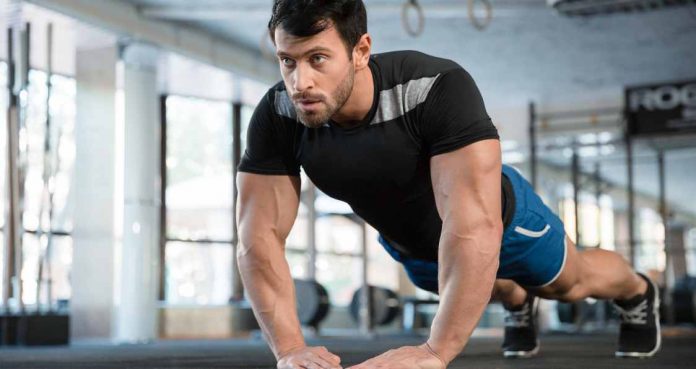 The push-up is held in high regard by many and is often seen as a test of true muscular strength and endurance.

In addition to developing upper body strength, power, and endurance, one of the best things about the push-up is its simplicity and versatility. Despite this, many people really struggle with push-ups and find it to be a challenging exercise to master.

This article will provide an eight-week training program that has been specifically designed to improve your upper body strength, power, and push-up abilities.

Poor technique is often the reason why many individuals struggle with the push-up. Therefore, this section will run through five steps that will allow you to perform the perfect push-up.

There are many benefits associated with regularly performing push-ups. This section will outline four of the greatest benefits.

Considering that the push-up requires movement through the shoulder and elbow joints, a large number of upper body muscles are recruited.

While the pectorals chest and the triceps arms are activated most highly during a push-up, the deltoids and traps (shoulders/ upper back) also assist (1). 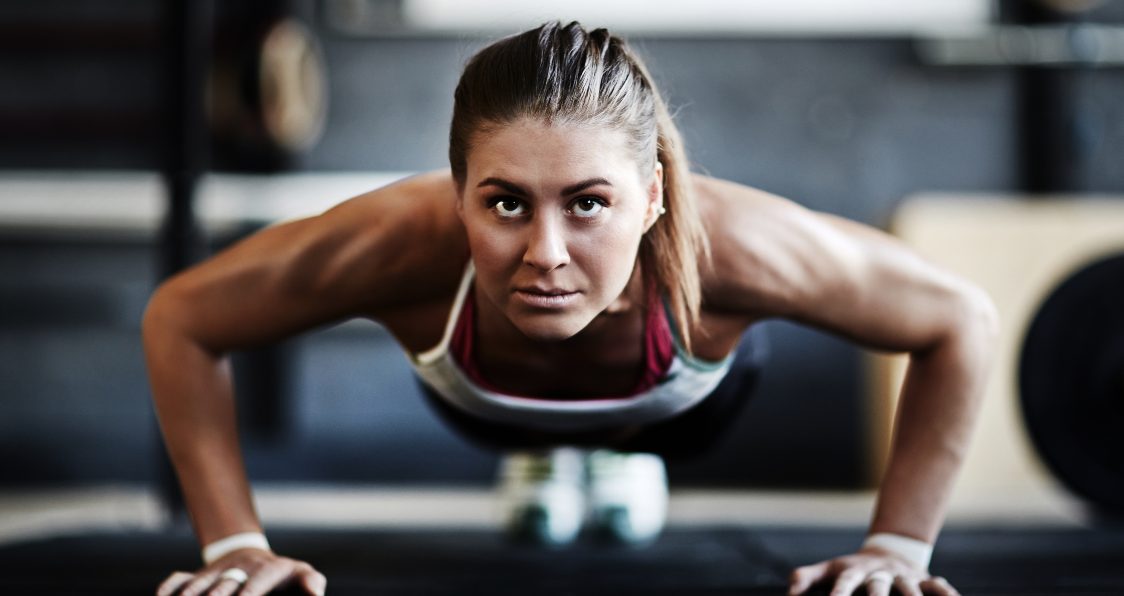 The core is often misunderstood to be the abdominals. However, the core is actually a whole host of the muscles found in the trunk that works to provide the body with stability.

During the push-up, the core must engage to ensure that the body remains stable during motion. Furthermore, it works to stabilize the spine and facilitate good push-up technique.

By regularly performing push-ups it is possible to increase the isometric strength of the core muscles thus increasing strength, stability, and technique (2).

Another benefit of the push-up is the impact that it can have on reducing the risk of injury.

Strengthening the muscles around the shoulder will significantly reduce the risk of a shoulder injury.

Furthermore, having a weak core is commonly associated with low back pain and problems. By performing push-ups and strengthening the core, the risk of low back issues may be reduced (3).

You may have heard the push-up be referred to as a “functional” exercise.

This simply means that it is an exercise that typically requires no equipment, works a variety of muscles throughout the body, and has transferable benefits to day-to-day life.

As reflected on, because the conventional push-up is bodyweight only, it is also highly convenient. To perform the push-up all you need is to find a space – no equipment required. 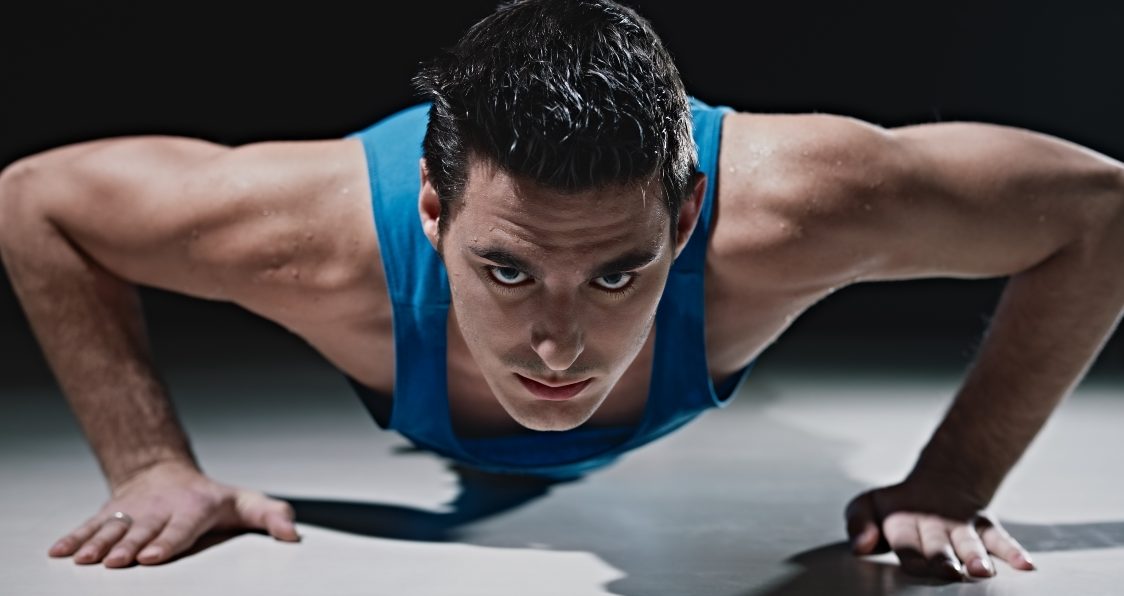 The plan outlined in the following section has been designed to drastically improve pressing strength and enhance push-up performance.

Regardless of the training program you are following, testing is a hugely important aspect as it will allow you to evaluate your progress and make any appropriate alterations to your training.

Therefore, prior to beginning the eight-week program, perform a maximal push-up test. Simply perform as many push-ups as possible without resting at the top or bottom of the movement.

If you have trained your upper body recently, avoid performing this test. Take a day or two to rest before attempting this test to ensure that fatigue is not a factor.

Once you have completed this test, record your result, and then determine your rep goal. A useful guide is to aim for four times your max rep.

For example, if you complete ten reps in the pre-test, your rep goal will be forty.

Week One and Two

During weeks one and two, you will perform the same workout twice per week at a minimum.

Using the rep goal, complete as many sets as required until you have successfully performed all of the reps.

Using the above example, let’s say you complete ten reps during the first set, eight in the second set, six in the third, and so on. Keep going until you have performed forty reps in total.

In terms of rest, during week one take one full minute rest between sets. In week two, look to reduce rest time to thirty seconds between sets.

Additionally, in the second week, you should also look to reduce the total number of sets needed to complete all of the reps.

In terms of assistance exercises, performing light bench and shoulder presses may be beneficial. Other useful exercises include dips and front raises. 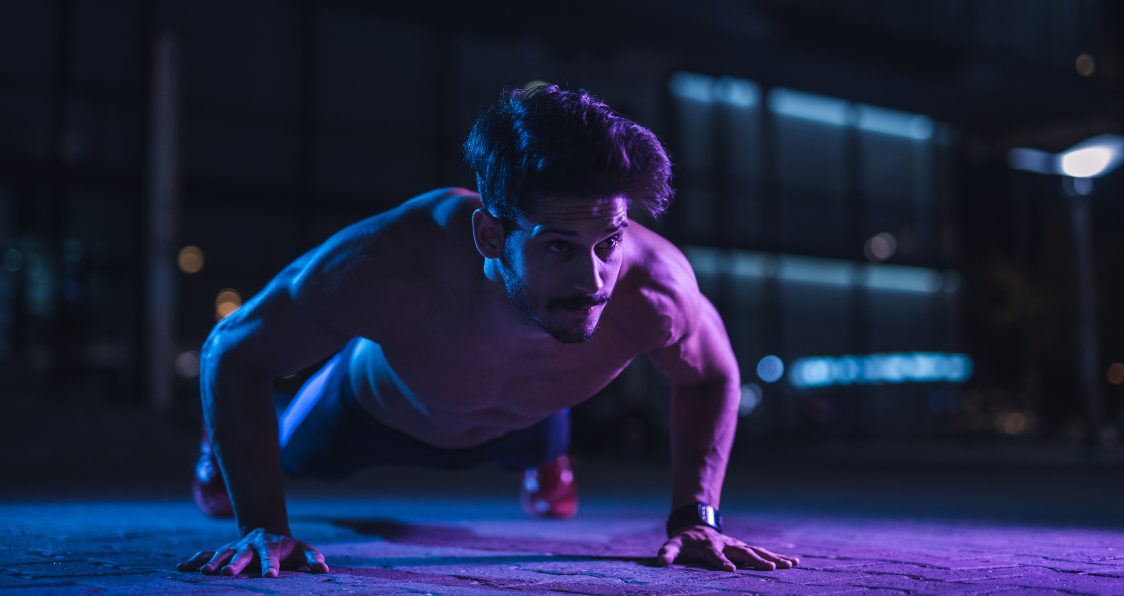 As you move into week three and four, frequency and training volume increase to ensure that progress continues to be made.

Instead of training a minimum of twice per week, you should now look to workout three times.

Using the previous example, sixty reps are to be performed per workout. These reps should be performed using as few sets as possible.

With both weeks three and four, the rest period between sets should be kept at approximately thirty seconds. That said, the goal should be to reduce this rest time to allow you to get through the reps quicker.

Moving into week five and six, frequency, training volume, and rest periods are all altered once again. At this stage, you can also look at introducing some push-up variations.

During these weeks, you will increase training frequency from three times to four times per week.

Furthermore, increase the total reps performed by another 50% to make it 200% of your rep goal. Referring back to the previous example, this would mean performing a total of eighty reps.

As with the previous weeks, perform as many sets as needed to complete the reps and look to keep the rest periods minimal.

Begin to experiment with your push-ups by performing different variations such as the narrow and wide push-up. Doing this can alter muscle activation (4) and consequently change the training stimulus.

Take care with these variations and, as always, ensure that good technique is the number one priority.

Intensity has been gradually building throughout the weeks and it culminates in weeks seven and eight. These weeks following the same pattern and structure as the previous weeks.

Frequency is to be increased to five times per week with rest periods between sets to be no more than fifteen seconds.

Total reps performed increases by another 50%. In the example, this means performing a total of one hundred reps.

You should continue to utilize different push-up variations and experiment with hand placement and angles to help you maximize push-up progress.

Be sure to include a number of sets of feet-elevated and hand-elevated push-ups to increase the demand on the muscles of the upper body and core.

Having completed the eight weeks, repeat the test that was performed at the start of the plan and compare the results.

If you feel that you want to improve your push-ups further, the eight weeks can be cycled once again using the new test results. 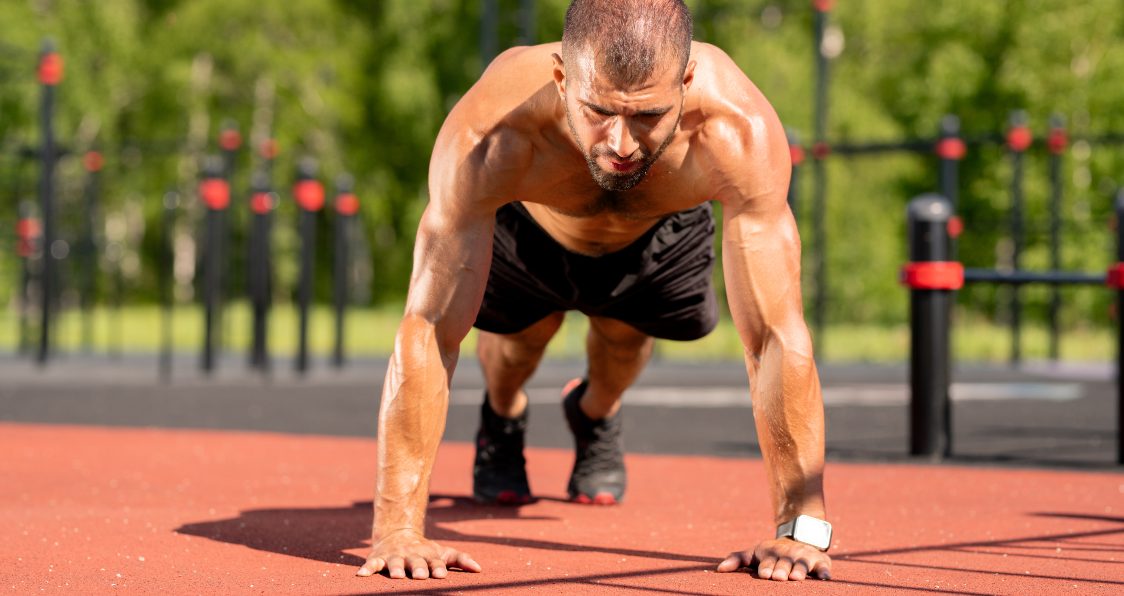 In order to maximize progress, there are a number of considerations that must be made before beginning this training plan.

First and foremost, heavy compound lifts may need to be reduced. This is particularly true for pressing exercises such as the bench press and overhead press.

Furthermore, isolation exercises that target the shoulder joint may also need to take a back seat.

Continuing with frequent heavy lifting and isolation work in conjunction with the eight-week push-up training plan may place too much stress on the shoulder joint and cause injury.

As highlighted earlier, the core muscles play a huge, but often unseen, role during the push-up by providing the body with stability.

Having a weak core will likely cause the hips to lift or sag thus interfering with good push-up technique.

Therefore, increasing the strength of the core muscles may facilitate a greater performance with the push-up by enhancing stability and technique.

Finally, ensure that each and every push-up repetition is performed with the strict form.

Not only will this substantially reduce the risk of injury, it will also ensure that you make the best progress possible.

The push-up is regarded as one of the best bodyweight exercises for building upper body power and endurance, core strength, and injury resilience.

The eight-week push-up plan, outlined above, is a highly effective and methodical training plan that will allow you to experience all of these benefits.