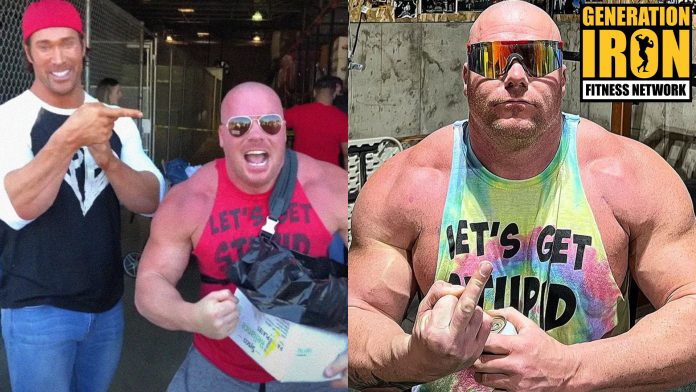 Huck Finn looks back at the most beers he ever drank in a single day before his workout (with Mike O’Hearn).

You may have heard of the viral stunt bodybuilder Huck Finn. And if you haven’t, you’re missing out on some hilarious and shocking entertainment. Reminiscent of the show Jackass but with a bodybuilding twist – Finn performs insane and dangerous stunts revolved around feats of strength.  We spoke with him previously – but decided to catch up to learn about his latest antics. In our latest GI Exclusive, Huck Finn shares the most beers he ever drank before a workout… which happened to be with Mike O’Hearn.

Viral bodybuilder Huck Finn is all about two things – beer and hardcore weightlifting stunts. In fact, he somewhat recently injured himself in his attempt of a recent stunt involving fire and a human ramp. You can check it out below:

While this particular stunt didn’t involve heavy lifting, a quick glance through Huck Finn’s Instagram page will show a man who very often drinks heavy amounts of alcohol before or even while lifting massive weight. It’ dangerous. It shouldn’t be done at home. But it’s damn fun to watch.

During our recent video conversation with Huck Finn, we asked him to detail the most he ever drank in a single day before a workout or stunt. To no surprise, his answer would be shocking to most casual drinkers and lifters.

Huck Finn reflected back to a day where he went to an event at a Dallas gym and drank over forty beers. After the event, he decided he was still in good enough shape to train in the gym. It turned out this training session involved natural bodybuilder Mike O’Hearn. While many of the bodybuilders and lifters at the event thought it would be impossible for Finn to start training – he went ahead with it anyway.

Ultimately, Huck Finn managed to bench 500 pounds that training session. And in some predictable outcome for Finn – he also ended up having a chair crushed over his head by Mike O’Hearn (all in good fun of course). This is the kind of mentality and lifestyle that Huck Finn leads in the bodybuilding industry.

Huck Finn also discusses with us how he manages to stay somewhat lean despite consuming so much alcohol. He also shares his hangover cure for the day after heavy drinking. He can’t let a hangover prevent him from hitting the gym and keeping his strength and physique up.

You can watch Huck Finn talk about his recent injury, his heavy drinking stunt with Mike O’Hearn, and his hangover cure in our latest GI Exclusive interview segment above!