Jamie LeRoyce discusses being an advocate for marijuana in the world of bodybuilding.

If you’ve taken one look at Jamie LeRoyce McTizic’s social media pages, you’ve quickly realized that he is a huge advocate for marijuana. As the United States continues to become more lenient on the once taboo drug, conversations about weed’s usefulness in different arenas have grown. This also holds true for bodybuilding and marijuana. In our latest GI Exclusive interview, Jamie LeRoyce McTizic discusses the pros of smoking weed as a bodybuilder.

Even though many states have started to fully legalize marijuana, it is still a federally illegal drug. While many communities and businesses have become more lenient on their stance of the drug, there are still others that see it in a negative light. That’s why during our conversation with Jamie LeRoyce McTizic, we asked him about the logistics of being a pro bodybuilder who openly advocates for marijuana.

For Jamie, the positives far outweigh the negatives when it comes to consuming cannabis. It’s been a vital part of his life and his mental health. Which is why he promotes it and openly discusses it not only on his social media accounts – but also during interviews like this one. In this interview segment Jamie discusses the pros that marijuana brings to bodybuilding. But he also opens up about how smoking weed affects his life professionally as a bodybuilder.

Check out our latest GI Exclusive segment with Jamie LeRoyce McTizic above!

We asked Jamie LeRoyce McTizic, is it harder to get sponsorships in bodybuilding while being so open about his marijuana use? Sponsorships can be a financial lifeline for professional bodybuilders. Prize money alone can’t pay the bills unless you’re one of the top 5 in the entire league. So does Jamie’s weed use lose him revenue opportunities?

It seems quite the opposite. Jamie admits that he might not get the traditional sponsorships that you see pro bodybuilders promote. What he does get are a slew of marijuana sponsorship deals. He’s promoted strains of weed, bongs and other smoking devices, and has a fitness apparel sponsorship.

Ultimately, his openness about marijuana has helped him get a different path for sponsorships. Allowing him to carve his own path financially as he continues to journey through his pro bodybuilding career.

The pros of marijuana in bodybuilding

We also asked Jamie LeRoyce McTizic, what are the pros of using marijuana as a bodybuilder? Jamie claims that “it makes the entire experience of bodybuilding enjoyable.” What he means by that is – the pain and the pressure of bodybuilding are alleviated by smoking weed.

Even bodybuilders who love to train understand that the pain that comes with it can be a mental block from getting to the next level. Marijuana, particularly the CBD found within it, have anti-inflammatory chemicals that help reduce pain.

For Jamie, that means he hits his max reps more often and is able to get past his own mental blocks that would otherwise lead to a less effective workout.

He also talks about how marijuana gives him the “muchies.” Some bodybuilders have claimed this is a bad thing as it can cause snacking on dirty foods. But Jamie LeRoyce McTizic sees this as a positive. Bodybuilding often requires overeating. Weed helps him build up more of an appitite. He doesn’t succumb to dirty foods and instead still eats clean. This allows him to help bulk more effeciently.

Lastly, it also helps him sleep. Jamie points out the the three most important factors in bodybuilding are to train, eat, and sleep. Weed helps him accomplish all three of those things more effectively. With a good night’s rest, his body can recover and build back stronger.

You can watch Jamie LeRoyce McTizic talk in full detail about weed and bodybuilding in our latest GI Exclusive interview segment above! 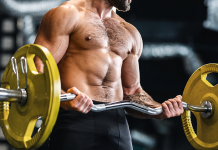 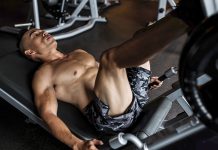