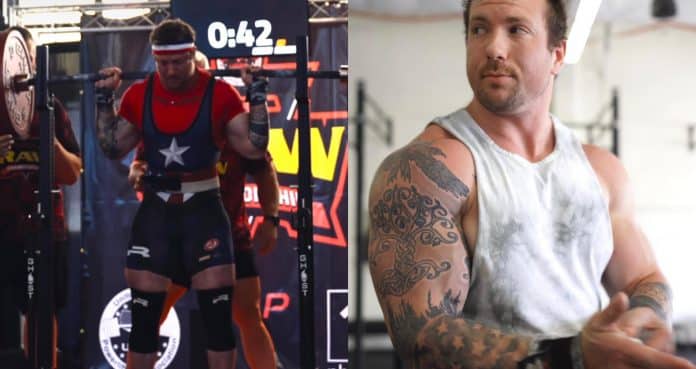 Powerlifter John Haack put on quite a show during the 2022 USPA Raw Pro.

John Haack is one of the strongest men on the planet pound-for-pound. He has often put on eye-opening shows during competitions and was at it again over the weekend. At the 2022 USPA Raw Pro meet, Haack set new world records in the 100kg division on bench press and total weight.

Haack entered the competition in North Kansas City, MO with goals and was able to reach them. He competed a 272.5kg (600.7lb) bench press. This is a lift he has been training to reach and was able to get there over the weekend. In total, Haack finished with 1,030kg (2,270.5lb).

John Haack competed in the 100kg division and entered a bit under the weight. His competition weight was 95.6kg (210.8lb).

The competition began with a bang as Haack completed a high squat of 347.5kg (766.25lb). He moved not bench press, where he began with a 240kg (529.2lb) lift before his 257.5kg (567.8lb) triumph. Haack was wearing a lifting belt and wrist wraps as he attempted the world record lift and was able to complete it without an issue.

Haack finished the competition with a 410kg (903.lb) deadlift. At the same meet, Samantha Rice and Joe Sullivan also broke world records. The 2022 USPA Raw Pro was Haack’s third competition of the year and he will continue to improve his numbers moving forward.

The full video of John Haack’s lifts can be seen at Strong Barbell Club’s YouTube page. At this time, Haack is one of the best powerlifters at the competitions he competes in and he will only get stronger to put up big numbers.