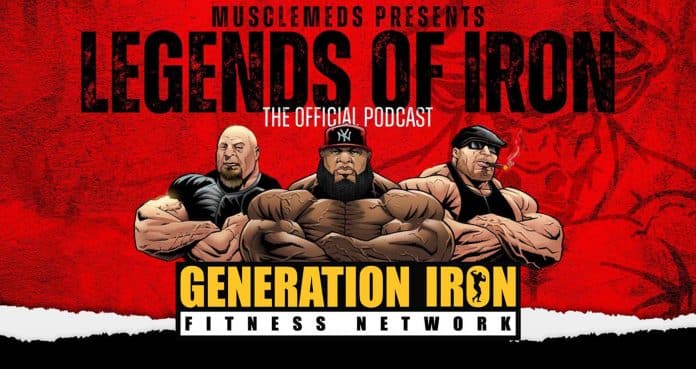 Generation Iron Network has announced that the MuscleMeds produced podcast, Legends of Iron, will become part of the official Generation Iron podcast catalogue. The podcast joins the likes of The Mike O’Hearn Show, Straight Facts With Jerry Brainum, and the Generation Iron Podcast, among others.

Legends Of Iron is an in-depth, unfiltered, no-holds-barred interview series discussing weightlifting, bodybuilding, and hardcore gym culture. Known for blunt conversation with nothing off-limits – the podcast is rising in popularity within the fitness world and beyond.

Most importantly, all three hosts live and continue their passion in the world of weightlifting – providing an atmosphere like hanging out in the gym discussing the latest and greatest in fitness. Including in-jokes, critical sport analysis, and no opinion being off-limits.

ABOVE: Previous episode of the Legends Of Iron podcast with special guest pro strongman Martins Licis

Legends Of Iron is produce by MuscleMeds – the creators of Carnivor Pure Beef Protein Isolate. The world’s number one selling beef protein. Focused on performance, MuscleMeds has been at the heart of improving peak performance for the last 10+ years.

I’m very excited about having our Legends of Iron Podcast join the Generation Iron Network.

“It’s the perfect platform for our audience and it will expand our reach,” said MuscleMeds president and founder Gerard Dente. “Generation Iron is an industry leader in bodybuilding media so to be a part of their portfolio is an awesome opportunity. Our entire team is looking forward to this.”

For current Legends of Iron subscribers, the podcast will continue to be published on all major podcast platforms such as Apple Podcasts, Amazon Music, Spotify, Google Play, and many more. New episode notifications will continue as usual without any action needed.

In addition to being featured on the Generation Iron platform, this new partnership will utilize Generation Iron’s industry network to bring a wider scope of guest interviews across bodybuilding, strength sports, combat, and fitness.

“Thrilled to continue our work together with the Muscle Meds team and introduce the Legends of Iron Podcast hosted by Jon Anderson, Nick Best, and Akim Williams to our global audience here at Generation Iron,” stated Generation Iron co-found and head of content Edwin Mejia Jr.

Generation Iron has increased expansion into the podcast market across both video and audio platforms. Ranging from interview, educational, talk show, and entertainment formats.

The first episode of Legends Of Iron to be released on the Generation Iron Network will feature guest pro strongman Evan Thompson – who is also the Associate Head Football, Lacrosse Strength and Conditioning Coach at University of Delaware. The episode is set to debut this Thursday, October 13th, 2022.

For more information and updates on Legends Of Iron, make sure to stay tuned to the Generation Iron Fitness Network every other Thursday for new episodes.