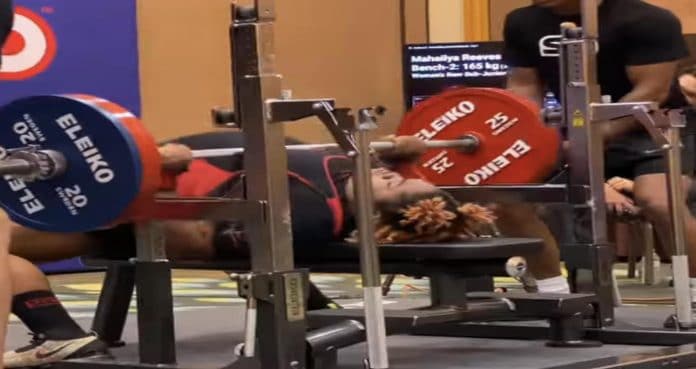 Mahailya Reeves put on a show during the 2022 AMP Nationals.

If you did not know who Mahailya Reeves was before, you will certainly know soon enough. During the 2022 Powerlifting America Classic (Raw) Sub-Junior, Junior, and Masters Nationals, the 18-year-old powerlifter turned some heads with her performance. In the process, Reeves set a new world record in the +84kg division with a 165kg (363.8lb) bench press.

Reeves showed a great deal of strength at a young age. She was able to burst onto the scene during a competition that is meant for competitors to get their name out on a big stage. Now, Reeves will continue to improve and build upon her record-setting day. While this lift is unofficial, she will have a chance to add to it and potentially set the official mark, which is held by Mierger Amelie. She lifted 163kg during the 2022 IPF World Classic Powerlifting Championships.

This lift was not even the heaviest on Reeves’ ledger. She has showed bigger lifts in practice and will have a chance to show it off once she competes in an IPF event.

During this competition, Mahailya Reeves was able to put up some big numbers all over the board. She entered the event weighing 138.37kg (305.1lb) and was able to compete in the +84kg division. She established a PR in just one event but her overall performance was enough to take home the victory.

Reeves was successful in two of her three attempts in squat. The first came at 212.5kg (468.5lb) before adding more weight. She was unsuccessful with 26.5 more pounds on the bar before taking it up another notch for her third attempt. Reeves successfully completed a 225kg (496lb) squat on her final attempt. This was 20kg less than her competition PR, which was set at the 2019 USAPL Raw Nationals.

Mahailya Reeves set the unofficial mark on bench press in her second attempt. This came after successfully locking out 160kg (352.8lb). She attempted to add 2.5 more kilograms on the bar for her third lift but was unsuccessful. Reeves set a competition PR on bench during the 2022 FHSAA Class 1A Region 2 Meet with a lift of 172.3kg (380lb).

Reeves set a new competition PR in deadlift. This came on her third and final attempt when she successfully lifted 220kg (485lb). Once again, her second attempt with less weight was unsuccessful. Reeves was perfect on first attempts at this event logging 197.5kg (435.4lb).