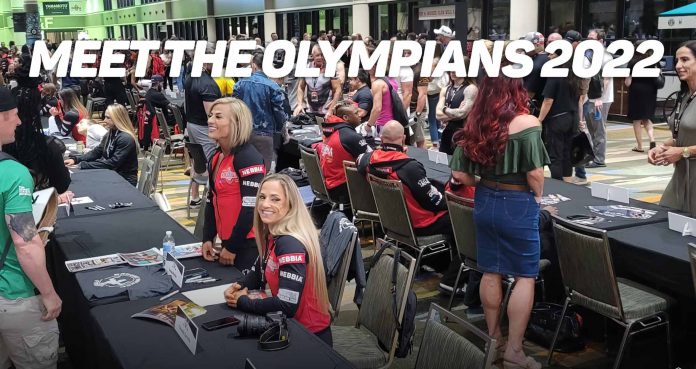 How to watch the Meet The Olympians live stream.

The Olympia 2021 weekend kicked off in spectacular fashion with a new format press conference earlier on Thursday, December 15th. But the press conference is just the tip of the iceberg for an exciting weekend and the biggest event of the year in the sport.

Traditionally, Thursday night kicks things off with two hyped events, the press conference and the Meet The Olympians – an event where fans line up to meet their favorite competing Olympia competitors, take pictures, and sign autographs.

Following in the tradition of last year, the Olympia is live streaming the entire Meet The Olympians event for free. While this is mostly an opportunity for fans to meet one-on-one with the pros, expect to see some on the fly interviews and predictions for the upcoming Olympia 2022 weekend.

For those interested in catching some interviews and last words from the pros before they compete this weekend – you can watch the full live stream of the Olympia 2022 Meet The Olympians right here.

And if you aren’t dropping the cash to watch the premium feed this weekend (which includes streams of the pre-judging and finals), you won’t be completely left out for the rest of the weekend either. The free live stream also includes other events beyond the Meet The Olympians. Check out the details about the Free Fan Channel below:

Even though the Olympia 2021 press conference has concluded and the Meet The Olympians is just underway, there are other events around the competitions themselves. Specifically, the Olympia expo – newly dubbed the Olympia World Fitness Festival.

Here are the events included in the free live stream fan channel:

For those who want to get the full experience, you’ll have to drop a bit of cash, which is different than past years that included a free stream of the Olympia competitions. You can check out the paid streaming options below.

Note: The Premium package does not include the Amateur events.

If you’re worried that you’ll have to be crouched over a computer screen the entire weekend – we have good news for you. There are a wide variety of TV and mobile devices you can watch. That means if you’re on the go or want to have a full TV experience – there are options for you.

See the different devices available for the Mr. Olympia 2021 live stream below:

Make sure to stick around the Generation Iron Fitness Network for the latest news and updates from the Olympia 2021.