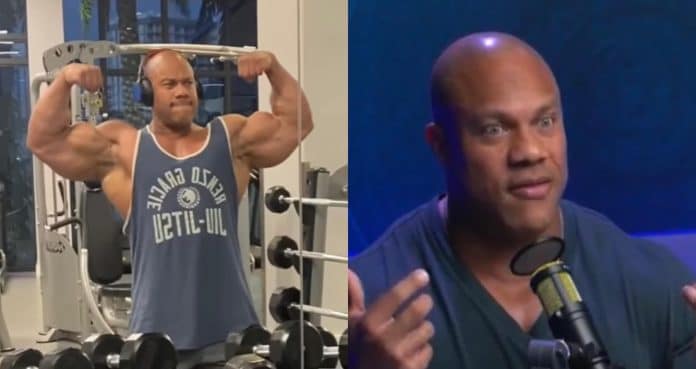 Phil Heath continues to train in retirement and does not see a return coming.

Fans have been hoping to see Phil Heath return to the stage for quite some time now. After seeing workout videos of Heath recently, there is no question why fans believe that he can still dominate on stage. According to the legendary bodybuilder, a chance of a return is still slim.

Heath ranks second all-time with seven Olympia victories. He won the competition each year from 2011-2017 and is behind just Ronnie Coleman and Lee Haney, who are tied with eight victories. In 2018, the late, great Shawn Rhoden defeated Heath. He returned to the 2020 Olympia, finishing third, and has not competed since.

Despite being retired, Heath has been able to maintain an elite physique and recently showed it off during a workout. In a recent interview, Heath revealed some secrets to his success.

“My mind was thinking like a boxer, this guy has got a great jab man and my jab may not have to be as good as his but I have to be able to move accordingly just to do the counter. If I can neutralize his strength, how is he going to deal with mine?” Phil Heath explained.

Phil Heath continued to explain how he was able to build a mentality and physique that made him a seven-time champion. It all began when he won his first title in 2011. Heath saw his competitors in a different light after finally reaching the pinnacle of the sport.

“I had arrived. That’s how I felt. It was all worth it. This is your new start. Because now you’re Mr. Olympia, you’re not these guys. You’ve already beat them. That’s in your rearview and fans may look at that like that’s cocky, no man, I did the work. I know the secret to my own success.”

Over the course of his early career, Heath used performances where he did not show his best to better him for the future. This includes a fifth-place finish at the Arnold Classic, which he referenced personally. Heath aimed to finish top-three and ended up in fifth place.

This is when he decided to set new goals and just build the best version of himself. Heath was able to make the necessary changes and become a champion.

“It comes from hard work, discipline, and all that but when I recognized that I could do this better. Again, I talk about video games. The best thing is not just to get, you know I’m like old school arcade games. You go to an arcade, and you’re like I got my name in the game but you’re 10th dude. Don’t you want to be a number one, and that’s how I looked at it. I have an opportunity if I choose to play that game again and just challenge myself. How big can I go. It can be in anything. Literally anything.”

Despite remaining in top shape, Phil Heath does not see a return to the stage coming. Close to two years after Heath was last on stage, fans are holding out hope that one day he will attempt to win that coveted eighth Olympia title.