Roelly Winklaar just proved that there are levels to this bodybuilding game. In a recent training video, Roelly completely outsized the considerably massive Larry Wheels.

To reach the highest levels of bodybuilding one must push their body past their limits. Namely, one must pack on a ton of muscle. You have to so much muscle in fact that you make other extraordinary strength athletes look small in comparison. That’s exactly the case when it comes to Roelly Winklaar.

One of the top bodybuilders in the world, Roelly Winklaar built a stunning physique. His size and muscle quality are on a whole different level than the average human being. That’s what happens when you put your body through hard and consistent training after all. But it’s clear that Roelly has reached new levels. If you’re able to make someone as big as Larry Wheels look small, chances are you’re operating on a insanely high level.

When the powerlifter isn’t battling Thor or beefing with Eddie Hall, Larry Wheels is pumping some serious iron. Over many years of training Larry has built up a pretty powerful and impressive physique. Despite being massive in his own right, there are still levels to this bodybuilding game. Roelly Winklaar proved that during his recent collaboration with the powerlfter.

During arm day training, both Roelly Winklaar and Larry Wheeler did curls together. Larry states in the Instagram post that he used himself as a reference to show his audience just how massive Roelly is. It’s actually quite the sight to behold.

Roelly Winklaar is quite a massive bodybuilder. If you can outsize a massive human like Larry Wheels then you’re definitely on another level.

What do you think about Roelly Winklaar out sizing Larry Wheels? 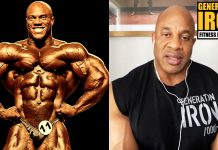 Victor Martinez Answers: Why Do People Criticize Phil Heath So Much?