Sadik Hadzovic is planning a comeback.

One of the most recognizable figures in bodybuilding today, Sadik Hadzovic has garnered a ton of popularity in the last decade of competing. The former Men’s Physique athlete turned Classic Physique competitor has been through some major changes during his career. And while he hasn’t competed in a few years, it appears that Hadzovic is hinting at a comeback.

Not competing since the 2017 Olympia, Sadik Hadzovic has still maintained an impressive physique. In fact some of his recent posts on Instagram suggest that he could potentially make a return to action.

The ultimate reason for setting goals is to entice you to become the person it takes to achieve them.

I think some of you want to know what happened and why I haven’t competed in the past few years.

Im going to drop a YouTube video and fill y’all in. But for now here’s to the start of a long prep 👊🏼

If that wasn’t indication enough that he plans on a return, Sadik Hadzovic made another post to which Classic Physique competitor Logan Franklin commented on.

If you’re serious about change, you have to go through uncomfortable situations. Stop trying to dodge the process. Hard work is the only way to grow.

Logan Franklin then responded to the post and Hadzovic followed up. 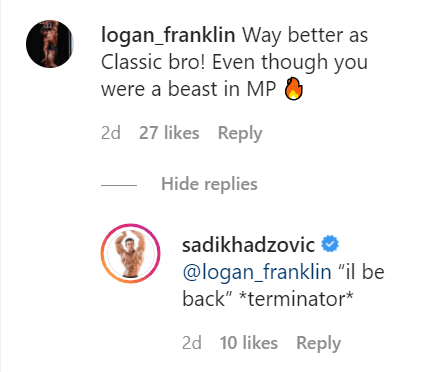