Becoming a monster has its price.

Bodybuilding is truly a harsh and unforgiving endeavor. Now, to some individuals that may sound like utter nonsense. “A bunch of self centered meatheads pumping iron is a tough endeavor?” You bet your ass it’s tough and it takes a great deal of mental strength to push through each set, each rep. When you get to the professional levels of the sport it’s a hole different ballgame. You not only have to build a tremendous amount of muscle, but you also have to cut a ton of weight in order to see all that defined muscle underneath. That weight cut however can have potential long lasting negative effects on a human being’s body. Tom Prince is a prime example of that.

While he may have been a tremendously talented bodybuilder, Tom Prince took an approach that would even become his undoing. It was quite clear that Prince had the awesome genetics to go far in the sport, but it’s that fact that ended up being his Achilles heel. Because his body was capable of doing so, he packed on more and more, and more muscle. As much muscle as his frame could handle in fact until he started his cut. He had such a tremendous weight cut that it ended up putting too much stress on his kidneys. Prince would need a kidney transplant and had to refrain from bodybuilding, his life forever changed.

Nevertheless, Tom Prince was an absolute beast who may be retired, but should never be forgotten. Take a look at Tom Prince back in his heyday as he showed off his ridiculous musculature on stage.

What do you think of the case of Tom Prince? 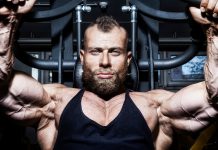