While the Arnold Classic’s biggest moments are the Men’s Open competition year after year. There are thousands of other sports that compete during the Arnold Sports Festival. The Arnold Strongman events are some of the most exciting moments outside of bodybuilding during the weekend event.

Case in point, Tom Stoltman stood tall as a true titan on Friday by breaking the ‘Manhood Stone Over Bar’ world record lifting 602lbs. It was officially labeled as a ‘Rogue Record Breaker’ which also earned him a $5,000 prize. The best part? He made the whole thing look easy:

4x World’s Strongest Man champion Brian Shaw was the previous holder of this world record by lifting 560 pounds in 2017. So Tom Stoltman not only set the new record, he completely shattered it.

The Arnold Strongman finals will be held later tonight alongside the Men’s Open, Men’s Physique, and Women’s Bikini bodybuilding divisions on the Arnold Classic main stage. Perhaps we’ll see even more records set by these behemoths when the pressure is on and the crowd cheers them through the final round.

Generation Iron Fitness Network will cover the full finals for both pro bodybuilding and strongman events. So make sure to stick around for more Arnold Classic 2020 news and updates! 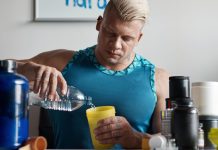