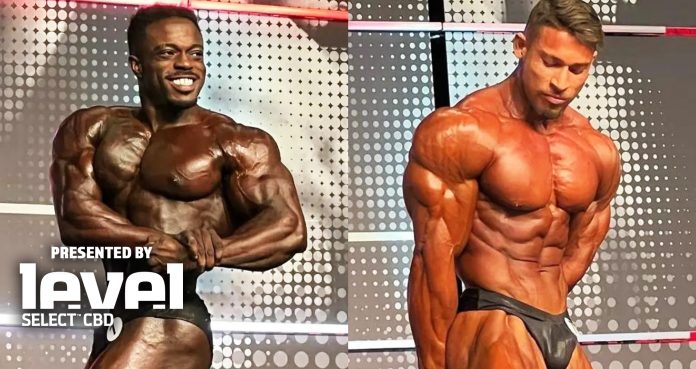 Friday afternoon held the day one pre-judging at the 2022 Arnold Classic, with the Classic Physique division taking center stage of the group. This year’s lineup was certainly stacked – with many pointing out that the roster included basically all top tier athletes from the Olympia minus Chris Bumstead. Many were excited to see how top competitors Terrence Ruffin and Breon Ansley would compare. Others were excited for relative newcomers and rising stars Urs Kalecinski and Ramon Rocha Queiroz. Ultimately, the Classic Physique comparison round ended with a strong face-off between returning champ Terrence Ruffin and Ramon Rocha Queiroz.

In what might come as a surprise to longtime fans fo the Arnold Classic, the pre-judging round for Classic Physique was relatively short. In total there were only three callouts. And most notably, the final callout did not involve any shifting of athletes. Each competitor stayed in their exact spot as they were originally called out.

Typically, head judge Steve Weinberger likes to keep both the athletes and the audience off balance by swapping competitors around. He also often will push the final callout with multiple posing rounds. This time he kept it short and sweet.

So what does that tell us? Perhaps that the judges feel confident in who will be landing in the top positions. Terrence Ruffin and Ramon Rocha Queiroz stood squarely in the center of the four person callout. While that leaves no room for a direct center athlete – it’s clear that these two were battling for first place. Ruffin in particular looked to be the absolute standout.

The final callout also seemed to match up with how the individual posing rounds were perceived. Terrence Ruffin was the first to pose – setting the standard that all other competitors needed to match up towards. Ruffin is the returning champion, so there was already some weight behind him starting first with posing routines. In addition to this, the moment he stepped on stage, he showcased an incredible package.

Urs Kalecinski also turned some heads upon stepping onto the stage for his posing routine. Urs has been gaining a lot of hype due to his physique updates on social media leading into the show. He’s a relative newcomer – but he did not disappoint. At first, it seemed that he would perhaps be impressive enough to land a first place spot. Though the final callouts seem to indicate he might be pushed down somewhere closer to third or fourth.

Ramon Rocha Queiroz, on the other hand, seemed to bring a wonderful package but one that was falling a little short. Originally, upon his individual routine, we had him placed closer to the bottom fo the top 5 pack. All of that changed upon seeing him standing next to his fellow competitors. Not only did he stand out among the other athletes on stage – he was placed by the judges right in the middle next to Terrence Ruffin. He was also never moved from that spot – despite being put through two complete rounds of posing.

Breon Ansley continues to bring a solid physique. Upon seeing his individual posing routine, we could see him easily landing a second place spot. But there is a world of difference between individual rounds and the comparison rounds. Ramon, perhaps using his height to his advantage, kept drawing eyes closer to his overall package in the final callout.

That being said, a lot can change in the six or so hours between the pre-judging and the finals. Each of these competitors will reflect on the callouts, review video if possible, and determine how they can improve ever so slightly to change the outcome of the final results. All four of these competitors have a chance to re-arrange what we saw in the final callout this afternoon.

One competitor that we see staying in place is Terrence Ruffin. Unless he makes some sort of fatal mistake leading into the finals, he brought a near perfect package. We predict that he will land the first place spot and the rest will battle for second. While Ramon Rocha Queiroz seems a shoe-in currently for second, we can see a scenario where Breon Ansley creeps up above him to grab that second place spot.

Only time will tell – and Generation Iron will continue to provide updates, analysis, and result updates later tonight when we return for the 2022 Arnold Classic finals!