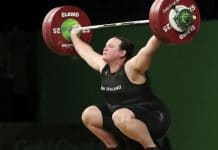 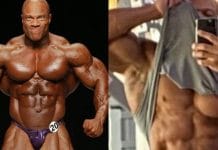 Phil Heath Shows Off An Incredibly Improved and Ripped Midsection

Akim Williams talks about how he was first inspired by Ronnie Coleman’s strength. Now he’s inspired by Dexter Jackson’s longevity.

Each generation is inspired by the ones that came before it. That’s true not only for sports but for life. We are all reacting to what was set as a standard, or perhaps legends that showed exceptional talent. So inspired Akim Williams and his physique? In our latest GI Exclusive interview, Akim Williams explains how Ronnie Coleman and Dexter Jackson inspired his goals in bodybuilding.

Akim Williams is known as one of the strongest bodybuilders currently competing in bodybuilding. But as he had mentioned in a previous interview clip, he has more recently stopped focusing on pushing the limits of his strength in favor of new tactics to improve his physique. That’s not to say one goal is right and the other is wrong. It just shows how Akim has been evolving and changing throughout his career.

Akim mentions that Ronnie Coleman was obviously an early inspiration to him. Ronnie is an 8x Olympia champion. A legend and a world record holder in the sport. He certainly inspired many people. Akim Williams was one of them. When he realized just how heavy he could train – he kept pushing the limits to lift big just like Ronnie Coleman.

But Akim Williams takes note that more recently, he finds himself inspired by Dexter Jackson. While this doesn’t negate the impact Ronnie Coleman had on his mindset or career – he has simply shifted priorities in what he wants out of his bodybuilding lifestyle.

Dexter Jackson maintained a pro bodybuilding career all the way to the age of 50. He only just retired last year in 2020. Not only that – but Dexter maintained high placing that entire time. To his very last Olympia competition, he nearly always maintained a top 10 placing.

Dexter Jackson achieved this, in part, because he focused less on lifting heavy and more on lifting light with high volume. Genetics played into the equation for sure – but more importantly, Dexter focused on a training tactic focusing on longevity.

It worked. As we just mentioned, Dexter Jackson’s career stayed relevant all the way until his final show. He’s the most winningest competitor in history. He’s won the Mr. Olympia, the Arnold Classic, and the New York Pro. It’s considered the triple crown of bodybuilding – a rare feat.

Akim Williams acknowledges that there will never be another competitor like Dexter Jackson. To be fair, to even achieve the same status of Dexter would likely take 25 years. So by definition – we won’t see someone like Dexter within the next decade.

Regardless, Akim Williams has grown more and more inspired by Dexter Jackson as his career progresses. Akim is still a bodybuilder who genetically carries much more size that Dexter. He still wants to focus on that mass monster look similar to Ronnie Coleman. But he also wants to approach his goals with longevity in mind.

Akim is focusing less on heavy lifts and breaking PRs. He’s focusing less on being the strongest. Instead he wants to focus on his conditioning in a new way. If he has to sacrifice a little bit of size – he’s willing to do that. Rather than explode and quickly burn out – he hopes to have a long and successful career like Dexter.

Of course, as Akim Williams stated, there will never be another Dexter Jackson. But Akim Williams can damn well try. With his recent improvements and higher placing – it will be interesting to see just how far Akim can take it.

You can watch Akim Williams talk about Dexter Jackson and Ronnie Coleman as his inspirations in our latest GI Exclusive interview segment above.

How Andrei Deiu Works Out For A Camera Ready Body