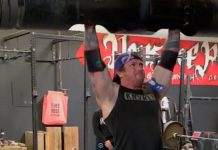 Brian Shaw predicts who will have the upper hand in the Eddie Hall vs Hafthor Bjornsson boxing match next year.

Excitement for strongman is high after the World’s Strongest Man 2020 crowned a new winner with Oleksii Novikov. But with the biggest strongman event of the year completed, all eyes are now on the upcoming boxing match between Eddie Hall and Hafthor Bjornsson. The two have been training for months leading up to the big crossover spectacle. With neither citing boxing as their main skillset – who will be able to get the advantage once they step into the ring? In our latest GI Exclusive interview, Brian Shaw shared his predictions for the Eddie Hall vs Hafthor Bjornsson boxing match.

Eddie Hall and Hafthor Bjornsson are strongmen first and foremost. But after a series of verbal blows between the two top tier competitors, they ultimately decided to settle their differences in the boxing ring. Both Eddie and Hafhtor are titan sized athletes who can most certainly pack a punch. The rivalry turned boxing match immediately sparked viral hype. Who will win the big match?

During our interview with Brian Shaw leading up to the World’s Strongest Man 2020, we took a detour to ask him who he predicts will get the upper hand in the boxing match. Shaw believes that Eddie will have the upper hand for two reasons.

“If I had to say now based on what I’ve seen… It seems like Eddie is taking it a little bit more seriously right now,” Brian Shaw stated during our interview. He continued:

“That’s with just what I’ve seen… I just feel like Eddie’s sort of latched onto it and it seems like he’s making his whole life revolved around that training right now. And that’s what you’re going to have to do to get, especially be a good boxer, be as good as you can get in that period of time.”

He then went on to make his second point as to why Eddie Hall might have the upper hand:

“And before this even started, I know that Eddie did some sort of sparring and that kind of thing… I don’t know how much carry over that will have.”


Of course, this is all just speculation. Brain Shaw makes it clear that this is just from what he’s seen himself. Perhaps Hafthor Bjornsson is keeping his intensity more behind closed doors. We’ve already seen how much weight he’s been losing as a result of his boxing prep. Perhaps there’s more than meets the eye with his training.

Ultimately, we won’t know until they both step into the ring next year. With many events continuing to have issues due to the pandemic hitting a second wave this winter, this kind of spectacle event is just what fans need to keep the hype going for the sport of strongman.

You can watch Brian Shaw break down his full prediction for the boxing match in our latest GI Exclusive interview segment above.