Rising strongwoman competitor Cori Butler is the current American record holder for the clean and press at 272 pounds.

Cori Butler is a strongwoman competitor who is on the rise in the sport. She started truly turning heads when she broke the American clean and press record at 272 pounds this past year. Having only started competing in 2018, to be a record holder after four years  has been an unreal experience for Butler. But if it is up to her – this is only the start. She’s now eying the Shaw Classic, a notably high profile and challenging event, as her next big competition and hopes to make a splash. In the latest episode of the Legends Of Iron podcast, Jon Anderson and Nick Best interview Cori Butler about her strongwoman origins, her 2022 training, and how she aims to be a role model promoting women being comfortable with strength and thickness.

At the top of this episode of Legends of Iron, Cori Butler cracks a joke on how she’s never been a girl with a thigh gap. Nick Best and Jon Andersen – notable strength competitors and massive men themselves jest back – “Who wants a thigh gap, anyway?”

This energy is exactly the honest, sincere, and confident energy that Cori Butler not only brings to today’s interview – but to the sport of strongman itself. Having only just started competing in 2018, Butler has skyrocketed in the sport culminating in her current most impressive victory – breaking the American clean and press record by lifting 272 pounds.

Cori Butler’s rise in strongman wasn’t an easy road. But as she explains her origin story in strength sports it becomes clear that her passion and determination are uniquely equiped for the quick success we’ve seen of her in competition.

Growing up, Cori Butler states that she had little opportunity in school or recreational activities that focused on strength for young women. However, she grew up in an athletic family and loved sports. So she turned to whatever sports seemed interesting to her. She competed in track and field and excelled at volleyball.

Unfortunately, an ankle tear injury during her junior year would dash any hopes she had of exploring a future in pro volleyball. She missed her entire senior season due to a slow recovery processed – thus missing an opportunity to get noticed for college. Fast forward to 2014, after taking some time away from the gym due to having children, she decided to jump back into her love of fitness and sports. She discovered powerlifting and began to compete only for a trainer at the gym to eventually suggest strongman.

The trainer informed her of a local strongman competition and suggested that she should try to jump in. She did and instantly was bitten by the bug. She loved the sport and wanted to start focusing on competing further.

Cori Butler won a local show her first year – qualifying her for a national show. “I got my dick kicked in on my first nationals,” Butler states honestly. But the major loss was not a deterrent for her. In fact, it made her push back stronger and take the sport even more seriously.

She hired a coach and began to solely focus on strongman training. At her next national competition she placed 3rd. This earned her a spot at the Arnold Strongman Amateur competition.

Butler planned on competing middle-weight at the time. But upon arriving at Columbus, Ohio for the Arnold Strongman Amateur in 2018, she missed her weight. She then had a choice, bow out and not compete – or try to compete in the heavy weight category. Not only did she still chose to compete, she ended up leading the pack in first place after the two preliminary rounds. By the end of the event, she landed second place overall.

How Cori Butler broke the clean and press American record

Typically, a record attempt is exciting but shortly lived. The person does the lift and then either succeeds or doesn’t. But for Cori Butler, another strongwoman competitor, Melissa Peacock, wanted to try and break the clean and press record as well. Suddenly, the record breaking attempt was a battle between two accomplished and talented competitors.

Both competitors ultimately broke the current standing record. So this meant that Cori had to beat out Melissa with a higher lift. They both continued to push each other – going back and forth with increased lifts. With the original record already surpassed, Cori Butler needed to best Melissa for the full accolades.

Ultimately, Melissa Peacock bested Cori by a few pounds. She lifted 275 pounds while Cori maxed out at 272 pounds. Though this seems like a defeat, Melissa is a Canadian strongwoman. So despite not breaking the overall record, Cori is now the American record holder for the clean and press. An impressive accomplishment no matter how you spin it.

Cori Butler is ultimately thankful to have Melissa Peacock in the running for the record. Why? Because both competitors pushed each other farther. Cori is convinced that she wouldn’t have lifted as much as she did if there wasn’t Melissa there challenging her to go harder. She’s sure that Melissa feels the same way.

Ultimately, Cori Butler still has a long future in strongman ahead of her. She aims to focus on the Shaw Classic next and hopes to earn more first place titles and a spot as one of the world’s strongest women.

Jon Andersen closed out the interview asking Cori Butler what she would want to be remembered by when her career ends. For Cori, it’s not only about the titles. It’s about being a positive representation for women everywhere. She wants to be a role model for woman to show them that being strong, being big, and going into stereotypical “men’s sports” is not only possible but should be encouraged. It can become a passion. It can be the defining aspect of your life.

You can watch the full interview with Cori Butler in our latest episode of Legends Of Iron above. Make sure to stay tuned every other Thursday for new episodes only on the Generation Iron Fitness Network or where ever podcasts are downloaded. 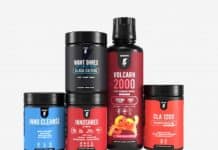