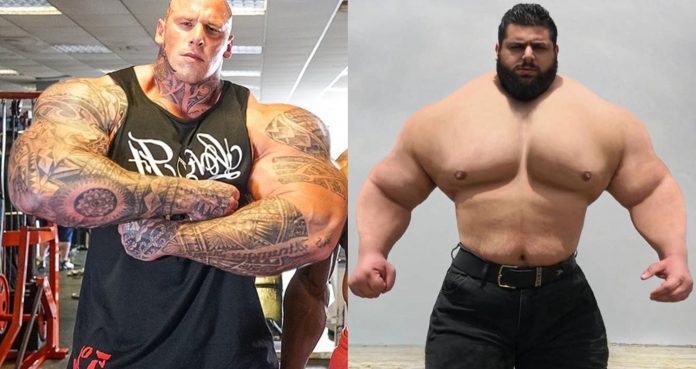 Martyn Ford and Sajad Gharibi have set a date to meet in the ring.

This is not the first time that Martyn Ford and Sajad Gharibi, known as the Iranian Hulk, have been linked together to square off in a boxing match. These rumors go back to 2018 but a time and date was never set. Now, there is a date planned which gives it a legitimate feel.

The two bodybuilders are set to meet each other on April 2nd, under the banner of celebrity boxing promotion BoxStar. This will be a boxing match and not an MMA fight, which is was originally thought to be years back.

In 2018, there were rumors that Ford and Gharibi were planning to meet in an MMA style fight. This ended up falling through, along with a bare-knuckle boxing match in 2019. Now, the two will have there chance to fight and it might be a little personal for both sides.

Martyn Ford took to Instagram to confirm the fight and say that there is a little extra juice heading into it. While Ford did not give many details, he highlights that Sajad Gharibi and his team made it personal by making some comments.

“So …… apparently @sajadgharibiofficial managed to find some crayons and has signed the paper work …. its ON …. many people have asked me WHY … all I will say on this platform is its PERSONAL ….

from him and his people, words have been said that can’t be unspoken … and when you see you will understand exactly why I’m doing this … every man, who is a father will understand. This maybe a boxing match, but believe me I’m happy to get disqualified to put my point across,” Ford wrote in his caption.

Ford is an athlete that has been training in MMA, Brazilian Jiu-Jitsu, and boxing. This is why he was comfortable taking on Gharibi in any type of match. As for the Iranian Hulk, he is an alleged MMA fighter but has not stepped in the ring for an official match.

Bodybuilders and strongmen making the transition to boxing is something that is becoming more and more present as of late. Of course, the sage between Eddie Hall and Hafthor Bjornsson is at the forefront because of the history and the recent postponement due to injury. Hall suffered a torn bicep and had to pull out of their scheduled fight in September.

It is unknown if and when they will reschedule but the match is already being advertised as the ‘heaviest match of all time.’ Ford and Gharibi could make a run at that title with both men weighing well over 300 pounds.

Martyn Ford and Sajad Gharibi officially have a date and this is good news for fans wanting to see this fight go down. It is one that will have more on the line than just a win in the ring. This is what makes it even more entertaining and sets up the storyline leading into April.