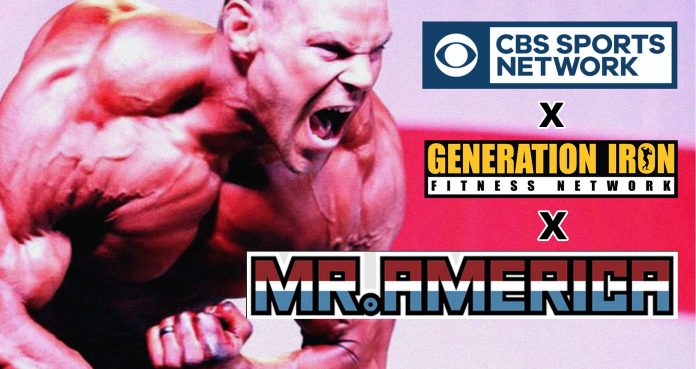 Generation Iron Network to collaborate with Mr. America and CBS Sports Network for coverage, previews, and a behind-the-scenes look at the Mr. America 2021.

Generation Iron Network has announced that it will be the official media partner for the Mr. America 2021 contest and expo taking place in Atlantic City at the Showboat Hotel on October 9-10, 2021. Under this new partnership, Generation Iron Network will become the official news hub for all previews, updates, and coverage of the Mr. America 2021 event. The full contest will also be broadcast on the CBS Sports Network at a later date.

The Mr. America competition is a legendary event and one of the oldest major bodybuilding competitions in the history of the sport. Before the Mr. Olympia or the Mr. Universe – there was the Mr. America. First held on July 4, 1939 as “America’s Best Built Man,” the event quickly changed to what is now known as the Mr. America contest the following year. The event was first sanctioned by the Amateur Athletic Union (AAU) but has since changed many hands over its near century long run.

After the AAU ceased holding contests in 1999, the Mr. America contest fell from the mainstream bodybuilding consciousness. The contest disappeared for many years only to change hands multiple times and return sporadically and inconsistently.

As of 2020, the Mr. America contest resumed as a non-sanctioned event promoted by Marc Tauriello of East Coast Fitness Concepts. Tauriello’s goal is to return the Mr. America to its former glory as the biggest bodybuilding event of the year.

“With the return of the Iconic Mr America in 2020 there has never been a more exciting time in drug free bodybuilding,” stated Marc Tauriello. He continued:

“Having Generation Iron as our official media partner for this iconic event in 2021 as well as being televised truly represents the significance of the Mr America, if it wasn’t for the Mr America, bodybuilding as a hole wouldn’t be what it is today.”

The Mr. America 2021 will be held in Atlantic City at the Showboat Hotel on October 9-10. It is a non-sanctioned event, meaning that a bodybuilder from any league or federation may compete – allowing for a truly open playing field of the best competitors in the world. The contest will also be drug tested under strict WADA (World Anti Doping Agency) guidelines. The Mr. America contest and expo will hold competitions for bodybuilding, powerlifting, Clash of the Tridents, Olympic Weightlifting, and MAS Wrestling.

CBS Sports Network will also be providing fully televised coverage of the Mr. America competition. The television coverage will not be live but broadcast at a later date. Generation Iron Network will provide full updates and announcements of the schedule, how to watch, and when to tune in.

Generation Iron will build strategic media campaigns focused on bringing the most engaging and up to date information and coverage of the 2021 Mr. America. The company will utilize its expansive media presence and its global digital subscriber base to re-introduce Mr. America events and athletes to viewers worldwide. The full contest will be a fully drug tested event and will be broadcast on the CBS Sports Network at a later date.

“We are thrilled to team up with Marc Tauriello and the Mr. America team,” stated Executive Producer Edwin Mejia Jr. “Generation Iron is proud to cover the longest running bodybuilding contest in the country. and offer a whole new immersive experience for viewers worldwide.”

For the entire month of September leading up to the event, Generation Iron will provide a unique inside look into the Mr. America competition, its athletes, and the history of this prestigious event. Expect featured interviews with athletes set to compete, vital live event updates including:

Without the Mr. America, bodybuilding and fitness as we know it wouldn’t exist today. It set the standard for prestige bodybuilding contests, influenced the Mr. Universe and later the Mr. Olympia, and helped raise the bar for professionalism and exceptionalism in the sport of bodybuilding.

Stay tuned to the Generation Iron Fitness Network for incoming news, previews, and athlete profiles during our lead up coverage to the Mr. America 2021.