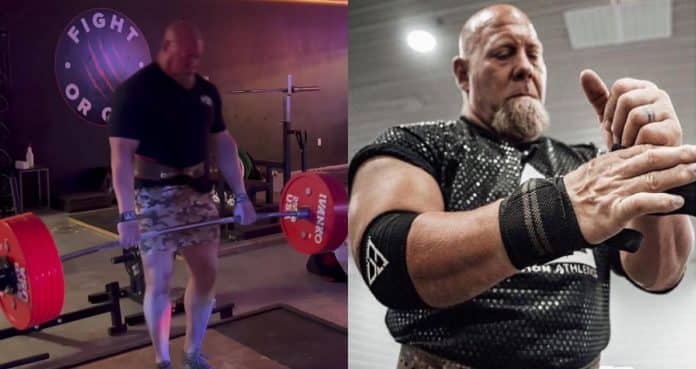 Strongman Nick Best continues to show off different feats of strength. At 53 years old, he is as strong as ever and shared his latest venture on Instagram. Best stepped up to 600 pounds on the bar and completed 16 reps of deadlifts using a conventional stance.

Best’s birthday was Nov. 3, just one week after this lift was displayed. It is clear that there is no plan to slow down for the powerlifter. Best competed at the 2021 Kern US Open, where he able able to set two Masters world records in the 140kg class.

“600lbs Deadlift for 16 reps at 53 (54 in 5 days)! @micah_marino was having a 32nd Birthday/Halloween/Deadlift party yesterday at @fightorquitco ! Went in to say happy birthday and do some deadlifts! Felt great and had a lot of fun!”

Nick Best’s Career At A Glance

Nick Best began his career in strongman in 2006. He debuted at the America’s Strongest Man competition and finished sixth. Over the course of the next decade, Best was able to reach the podium on many occasions.

In 2010, Best won gold during the 2010 All-American Strongman Challenge. He defeated the likes of Louis-Philippe Jean and Mark Flex. Best got a taste of victory once again during the Giants Live North American Open in 2016.

Nick Best last appeared in a competition during the 2020 World’s Strongest Man competition. It is unknown if a return to competition is in the works but Best continues to train at a high level. With the calendar preparing to turn to 2023, there could be some plans in the works.