Nick Walker gives his honest takes about the 2022 Olympia.

Nick Walker recently spoke on his performance at the 2022 Olympia stating that he could have taken second place. The third place winner also spoke on Samson Dauda and Andrew Jacked and how they can become a major threat in the future.

After taking third place at the 2022 Olympia, Nick Walker is on a mission to ensure that he’s ready to dominate in 2023. That said he’ll have a lot of competition to deal with at the next show. Of course there’s 2022 Mr. Olympia Hadi Choopan to consider as well as Derek Lunsford who looked impressive with his second place showing. Walker believes that he had the capability to come in second. When you consider the fact that he was the Olympia peoples champ, he could have a point. In a recent episode of his new podcast along side Guy Cisternino, Walker expressed his thoughts on coming in third place.

“I’m very happy I took third. But I think as an overall package, I think I could have been second. Me, Derek, and Hadi will probably be battling this out for years unless Samson comes out of the woodwork or if Andrew nails it one time. I do believe us three will be there for quite some time.”

But even those outside of the top five will prove to give Nick Walker fits in the future. Two people in particular to watch out for are Samson Douda and Andrew Jacked. Walker believes that both men have what it takes to be a potential challenge to overcome in the future.

“I arguably could have probably had Samson beating Ramy to be honest. Samson’s a freak. I’m definitely excited to see what he can do at the Arnold, what he can do at the next year’s Olympia. My personal opinion of Samson, I think he should sit out the Arnold and focus on making more improvements for the Olympia. He could cause a lot of havoc. His only downfall was he wasn’t conditioned enough.

“Andrew made us look like amateurs. When this man was just chilling in his little Speedo, just relaxing, you’re just like what the f**k is that? He is one of the nicest guys.”

From the sound of things, Nick Walker considers both Samson Dauda and Andrew Jacked major threats in the coming years. Both have great physiques and would mostly need to focus on conditioning in order to cement themselves as top of the food chain in the division.

To hear what else Nick Walker had to say about the 2022 Olympia click here. 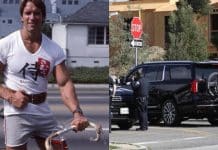