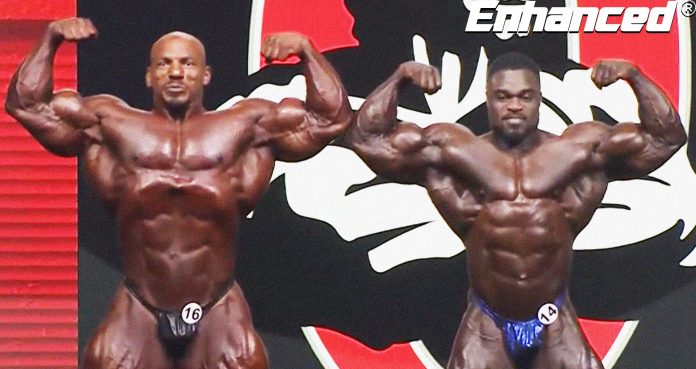 Brandon Curry looks on point against Big Ramy’s slightly off conditioning during the Mr. Olympia 2021 prejudging.

Friday night of the Olympia 2021 ends with a climactic cliffhanger. After a series of exciting finals – the very last event of the night was the Mr. Olympia prejudging. The best Men’s Open bodybuilders battled it out on stage for the most prestigious award in the sport. Ultimately, the prejudging came down to an ultimate face off. The returning champion Big Ramy vs the former champion Brandon Curry. It was an incredibly close match. Based on what we saw tonight – Brandon Curry very well might reclaim his Mr. Olympia title.

Of course, much can change between tonight and the finals. The competitors have a full 24 hours to make adjustments, tighten up, and prove themselves one last time on Saturday night. The battle was so close between Big Ramy and Brandon Curry – that even the slightest change could effect the outcome.

Much like the Men’s 212 prejudging – this year’s Mr. Olympia had an incredible talented and stacked lineup. It just might be one of the most tense competitions for the Men’s Open in years. Beyond the top two contenders – many up-and-coming younger competitors had a real moment to shine. And also showed off just how threatening they can become in future years. The top 5 looks to be very different than the typical names we’ve seen on the list in past years. That just shows how impressive this year’s lineup really was.

Let’s break down in our full Mr. Olympia prejudging and analysis report:

After a round of random group comparisons, we kicked off the Mr. Olympia 2021 prejudging callouts in earnest with the judges initial featured choices for the top six. The expected Big Ramy, Hadi Choopan, Brandon Curry, and William Bonac were brought into the fold here. It was also exciting to see that relative newcomers Nick Walker and Hunter Labrada made their way into this lineup. Both had plenty of hype throughout the season – and their hard work seems to be paying off.

Big Ramy and Brandon Curry were squarely placed in the middle of this lineup. It was somewhat unfortunate to see William Bonac pressed off into the sidelines of the lineup. A competitor who once landed second at the Mr. Olympia and is a former Arnold Classic champion – his physique couldn’t keep him in step with the center highlighted competitors. 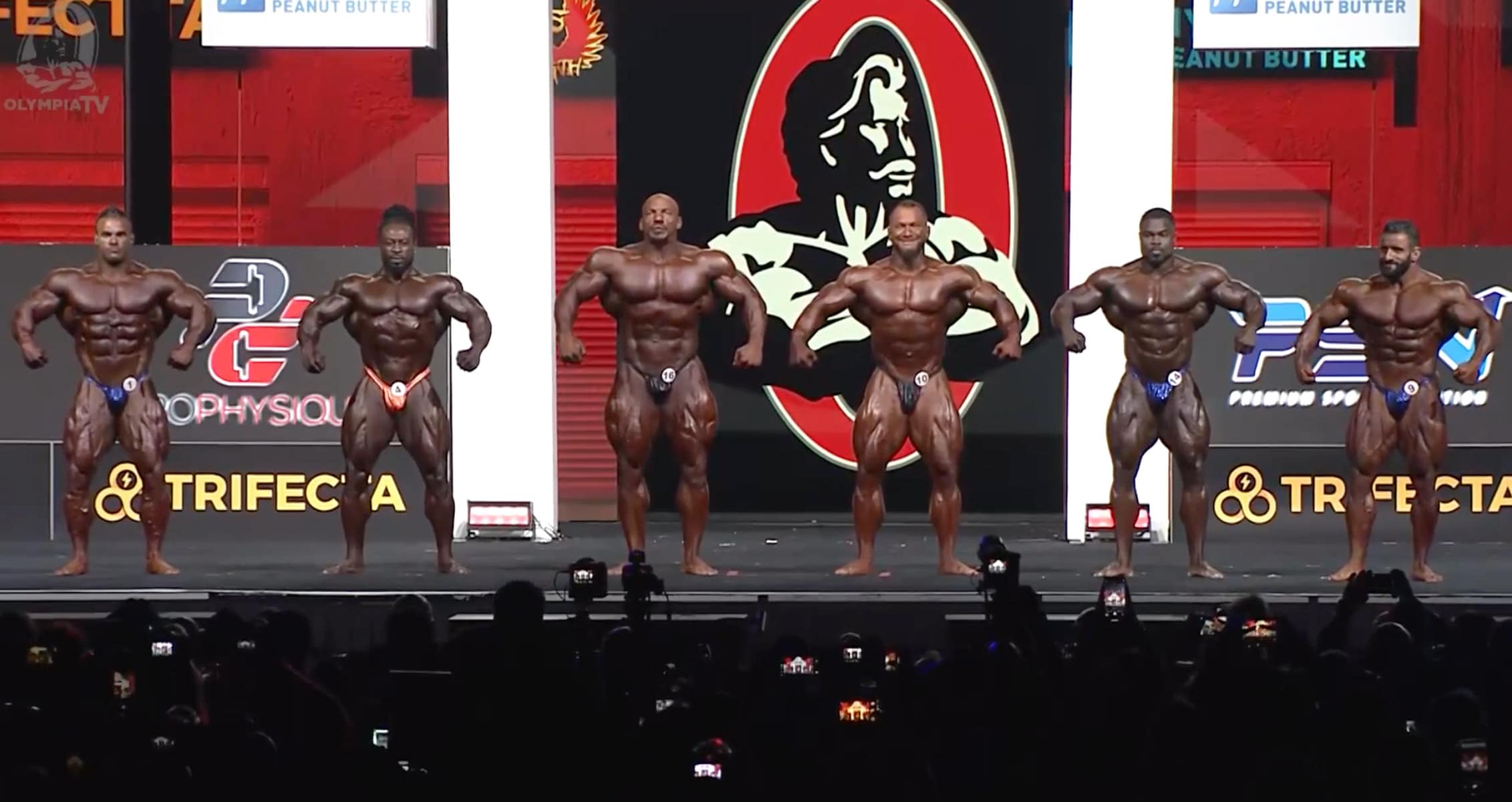 The Mr. Olympia 2021 second and third callouts went as expected – with follow up competitors battling it out for presumed rankings below sixth place. Many of these athletes also sported incredible physiques – but in the biggest competition of the year, athletes who would have otherwise landed wins found themselves facing off in lower callouts.

Roelly Winklaar found himself in the second callout. After a rough year of missing other big competitions – many fans hoped to see him in a new and improved form for a big placing. But it seems yet another missed opportunity for a fan favorite mass monster. 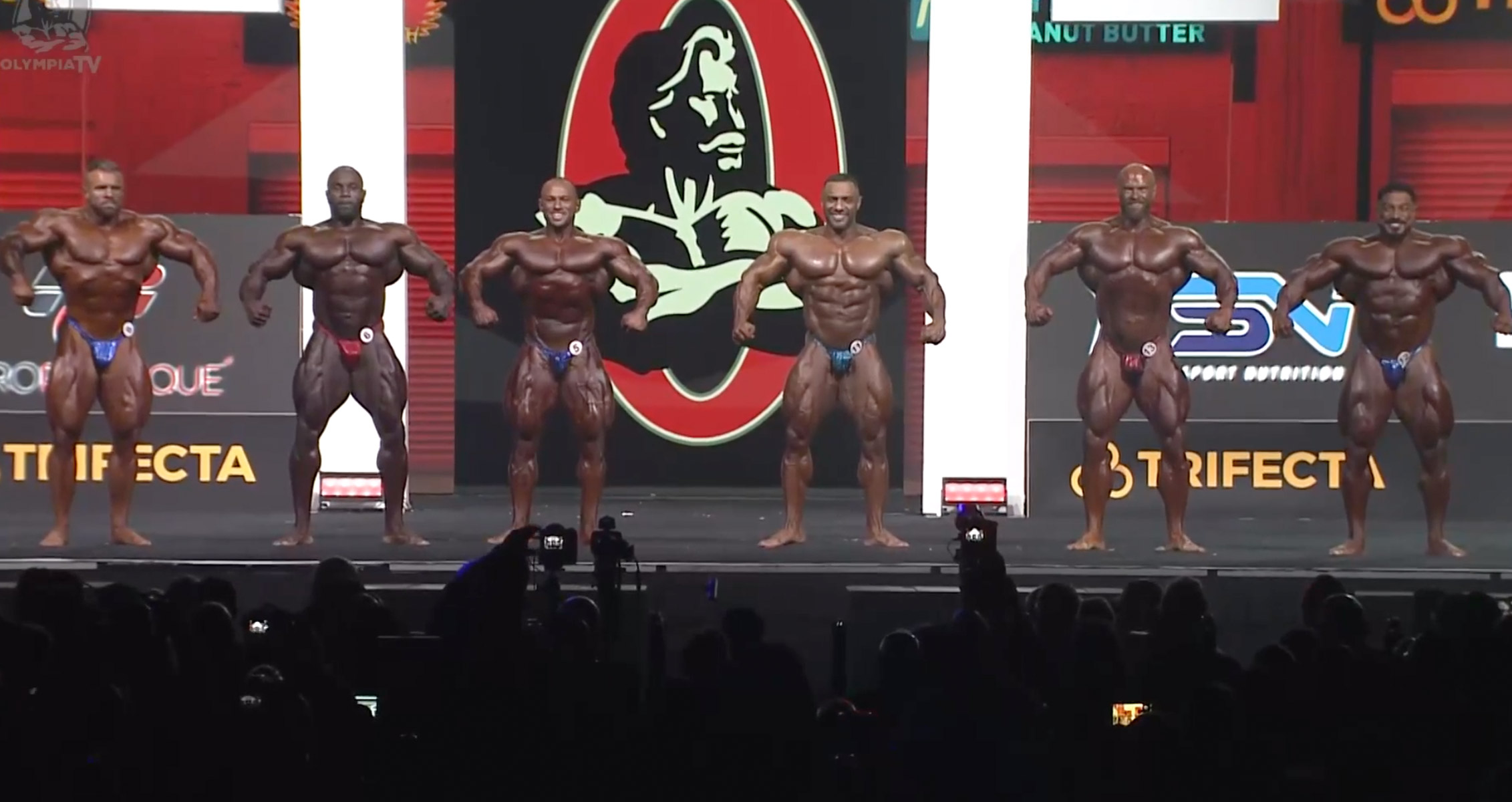 The Mr. Olympia 2021 fourth callout was an interesting one. It brought back some top competitors into the fold for what looked like a battle for sixth place. Bodybuilders Roelly Winklaar, Akim Williams, Mohamed Shaaban, and James Hollingshead all duked it out to claw up in the standings.

These competitors will be athletes to keep our eyes on during the finals tomorrow. With a full 24 hours to prepare in between the two nights – these four could shift into the top five if they place their cards right. 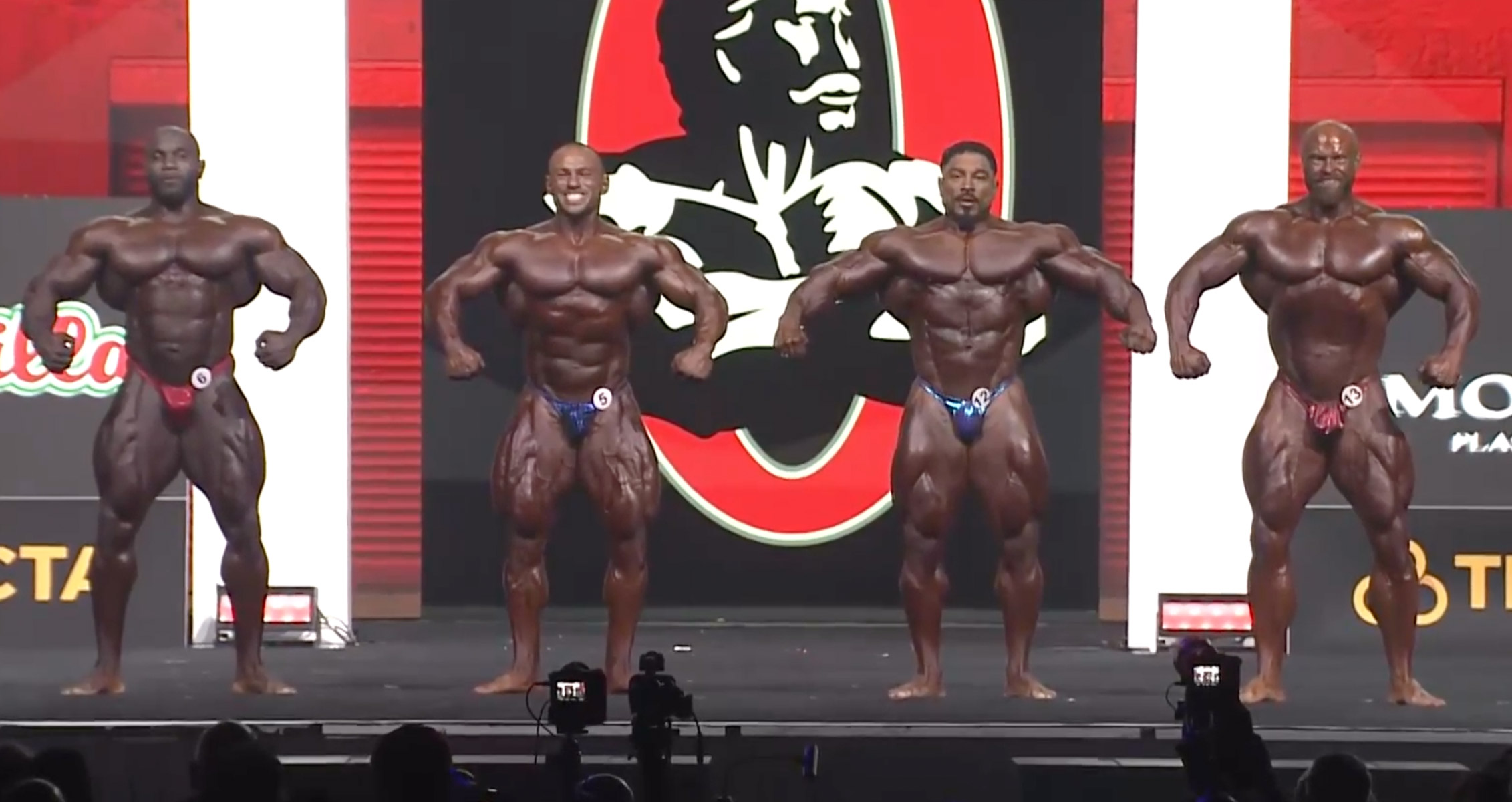 It was clear that we were working our way back up to the front of the pack. The fifth callouts seemed to focus on all but the top two competitors of the night. This is a very dangerous pack of athletes. As we’ve said before, with so much time between the two nights – this is where a lot of the placings can get shifted around by the awards ceremony tomorrow. Who of these competitors will earn the third spot? And can any of them inch past the current top two? 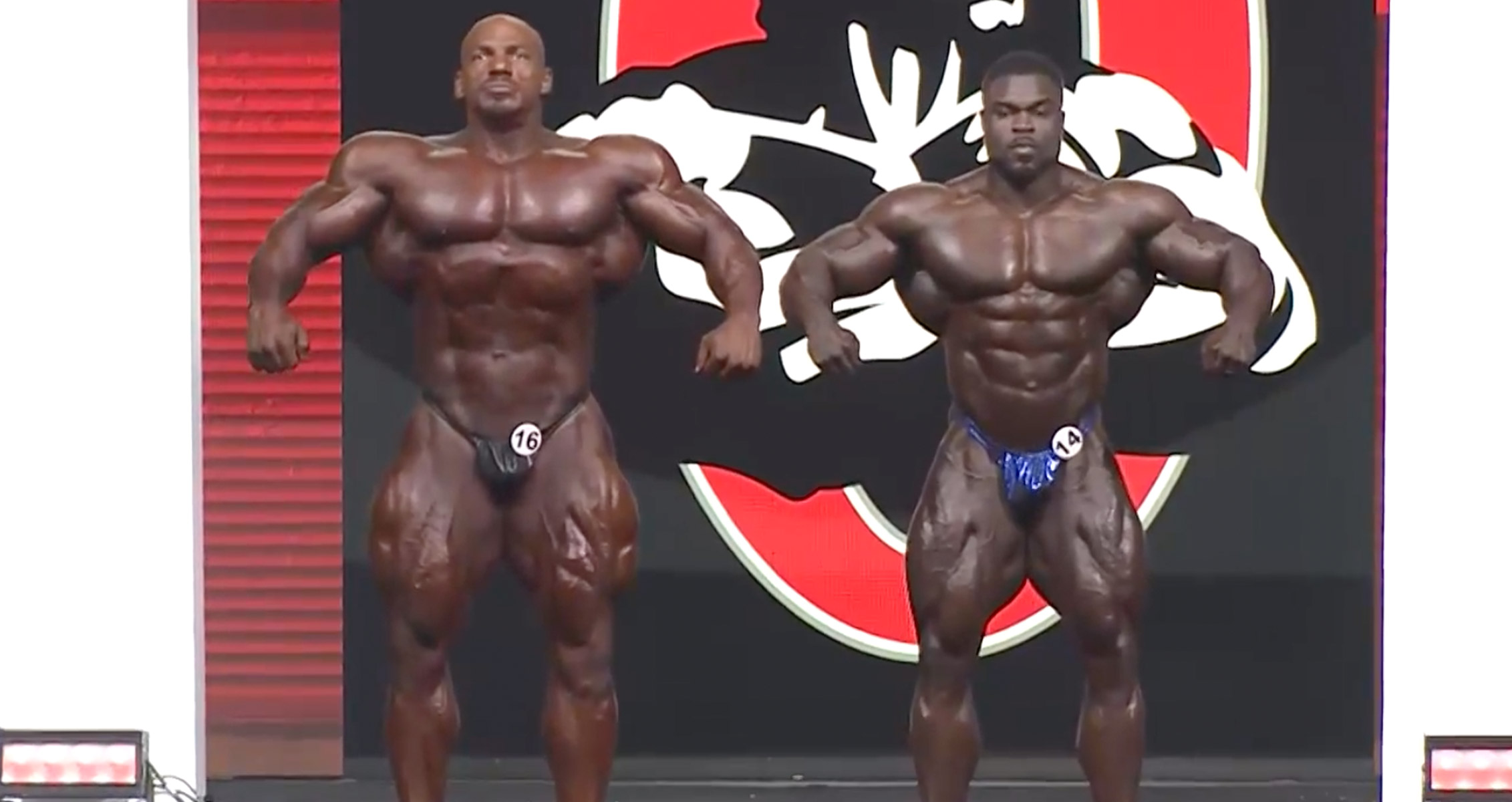 Ultimately the entire Mr. Olympia 2021 prejudging was building up to this next moment. In a two way duel – Big Ramy and Brandon Curry battled it out in a final top two callout. Big Ramy has been inconsistent with his conditioning throughout his career – and unfortunately he seemed to bring a quality of sharpness that was slightly off compared to last year. Still an extremely impressive and dangerous physique – this kind of slight slip could be all it takes to lose rank as returning champion.

It doesn’t help that Brandon Curry has remained consistent as ever. Curry has always slowly improve year after year – and 2021 is no different. Brandon cannot match up to Big Ramy’s size – but his conditioning and structure were fantastic. This is the kind of steady improvement that can take advantage of even the slightest drops in quality seen on Ramy.

Ultimately, it was a blow for blow final callout. Every other pose seemed to favor one competitor over the other back and forth. This battle is incredibly close. Add the additional 24 hours to get things into tighter shape – and this is anyones ballgame. At the moment, we would place a slight lead onto Brandon Curry. Could this be a comeback for our former champion? Only time will tell.

Until then, stick around the Generation Iron Fitness Network for our continued updates and coverage of the Olympia 2021.