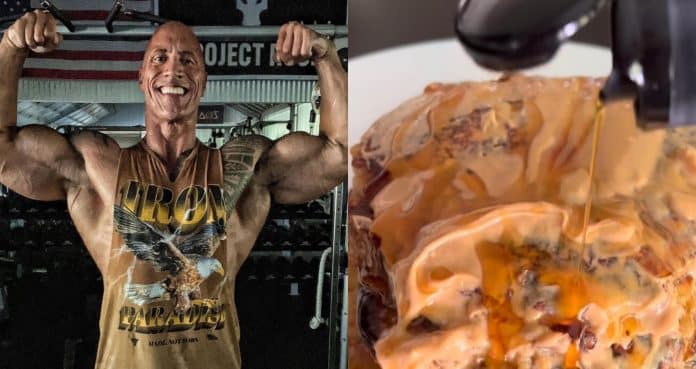 The Rock enjoys his cheat days and showed off another recipe he likes to use.

It is clear that Dwayne “The Rock” Johnson likes to take anything he does and make it as good as possible. That includes his cheat meals. The Rock has become known for throwing together some massive cheat meals over the years. This continued recently by sharing a pancake recipe that emulates one of his favorite dishes.

The Rock began his career as a charismatic superstar for WWE. He is still known as one of the best of all-time in the business. Johnson was able to turn this into an acting career and enjoy great success in some box-office smashes. He often shares videos from his Iron Paradise home gym throwing some weight around. On other days, he shares his insane cheat meals.

On Sunday, The Rock decided to recreate a pancake recipe that he described as one of the best he ever had. It consisted of peanut butter, maple syrup, and blueberry jam on coconut pineapple pancakes.

This is not the first time that Johnson has chosen breakfast as his cheat meal. Whether it is French toast, biscuits, or pancakes, The Rock has shown that he loves the first meal of the day. Here, he decided to go with a replica of a pancake recipe that he enjoyed while in Hawaii.

The Rock first tried this dish at a restaurant in Hawaii and had private chef Janette Clark put something similar together.

“He really has fun with food on his Sundays. I get to dream up the meals. He tells me what he wants and then I get creative. But I have to say, on the other days of the week, I don’t know anyone who is as disciplined as he is. He’s very focused on his wellbeing. It works well for him,” Clark told Men’s Health.

This meals comes shortly after The Rock tried In-N-Out for the first time. He chose to go with two double-cheeseburgers and two orders of fries. Johnson is the type of celebrity that can act as an inspiration in the gym because of his work ethic and dedication. What he has also shown is that he can inspire in the kitchen as well.