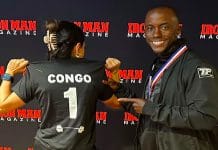 Toney Freeman is a former IFBB pro bodybuilder and entrepreneur. He was dubbed with the nickname “The X-Man” due to his classic X-frame physique showcasing a wide back, broad shoulders contrasted with a small waist and massive thighs.

Over the past few months we’ve released multiple GI Exclusive segments from our interview with Toney Freeman. Now we’re releasing the full length interview including topics such as the man health scares throughout his career, the pros and cons of being a tall bodybuilder, and the jaw dropping moment he saw Victor Martinez in 2007 – among others.

Listen To Our Toney Freeman Interview On The Generation Iron Podcast

The Pros Vs Cons Of Being A Tall Bodybuilder

“I just didn’t want to push the envelope. You know, I got up to 323 (pounds) and for lack of a better word I was like – whoa, I don’t want to go any further.” Toney Freeman stated in our interview. “I got to the point that I was like wow – okay I literally figured out how to do whatever it is that I wanted to do. But I never didn’t want to have the package. You know what I’m saying. I didn’t want to be up there just dwarfing everybody.”

It seemed for Toney Freeman, he didn’t want to become big at the expense of his aesthetic. He also goes on to discuss how his limbs were the long in proportion to his body. This is where the real challenge revealed itself. He knew that no matter how hard he tried he couldn’t get his wrists and forearms to match the size he could build on the rest of his body. He needed to accept that limitation and work with it.

One athlete that Toney Freeman saw peak perfectly on the stage is Victor Martinez at the Mr. Olympia 2007. Ultimately, Jay Cutler beat out Victor for the win. It was an extremely controversial decision that many will debate over even to this day. When you hear Toney Freeman describe seeing Martinez backstage – you can understand why so many fans were shocked that he ultimately lost.

“Victor peaked at the 07 Olympia. I saw it myself. I mean – wow, it was insane,” Toney Freeman states in our interview. He continues:

Not surprisingly, both involved diuretics. We’ve discussed with other athletes and experts in the past about the heavy risks in taking diuretics. Toney Freeman agrees especially after his experiences. He’s had moments where he could barely stand on stage after dropping 17 pounds in one hour. He also had a health scare where he couldn’t see upon waking up nor hold down any food.

These are health issues not to take lightly. While Toney Freeman recovered without serious issue – there are others who might not. Unfortunately, nearly all sports require athletes to push to the extreme. This will always involve risk. Being a top pro athlete requires being a little bit of insanity – so to speak.

We spoke with Toney Freeman for over an hour. So there are far more topics beyond what is covered in this article that get discussed in the video. You can watch Toney Freeman’s full GI Exclusive interview above.