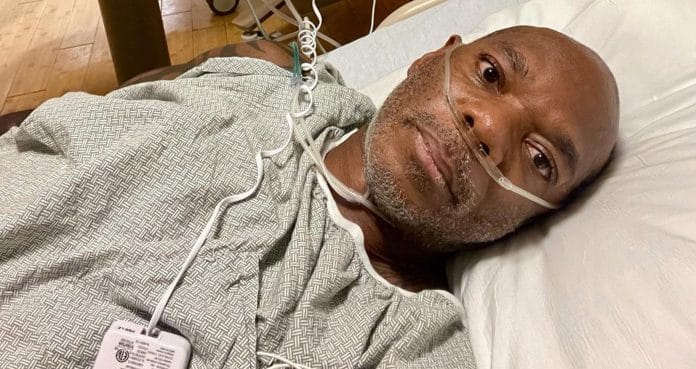 Flex Wheeler shares update on Instagram with a mix of positive and concerning news.

On October 9th, 2021, Flex Wheeler announced that he had been diagnosed with COVID-19. The announcement in question was posted from the hospital via his Instagram. Though he remained positive and claimed, “I will defeat the virus,” fans were concerned due to the fact he was hospitalized. Now just a few days later, Flex Wheeler has provided an update on his condition – containing a combination of good and bad news.

Posting a picture from his hospital bed, Flex Wheeler reveals that he is still hospitalized but starts with some positive news. His COVID-19 symptoms are getting less severe. His fever is reducing with less aches and migraines. He also reveals that he had developed some respiratory issues – though did not need to be intubated. He has been given medication that seems to be having a positive effect – and states that the hospital staff seem to be more positive after his latest chest scans.

“Still in the hospital. Covid Bon-respiratory symptoms are getting better. Body aches, fever, and migraines are starting to get less excruciating day by day.

A few days ago I did start to experience respiratory issues. I was put on oxygen (no breathing tube) and meds. The meds seem to be working and they have lowered the level of oxygen that I am on. I will be on these meds for at least another 11 days. The doctors did actually smile during my last chest films, they don’t normally give you a hint either way, so I’ll take it!”

Unfortunately, despite this seemingly positive news, Flex Wheeler also shares some concerning updates. He has also suffered acute kidney failure. This seems connected to the fact that he had a kidney transplant only a year ago. This has put him on immunosuppressant drugs. This, Wheeler claims, puts him in a strange unique position of being immunocompromised while also on immunosuppressant drugs. This is a potentially dangerous combination when it comes to the COVID-19 virus.

“The scary: I am in acute kidney failure, so my INR stabilization is an issue right now. As you may know, I received a kidney transplant over a decade ago.

I am in that rare case of people that are immunocompromised, while also taking immunosuppressant drugs for my kidney. So, even though I’m fully vaccinated, I hit that sweet spot that put me in danger for this virus. Covid really is he worst thing that I’ve ever gone through.”

Despite this scary news, Flex Wheeler remains positive. He thanks friends, family, and those in the bodybuilding community that have provided him support. He ends off his update by stating, “I will beat this!”

The entire staff here at Generation Iron send out hope and support for Flex Wheeler during this time. The Generation Iron Fitness Network will continue to provide updates as they become available for this developing story. We all hope for a smooth and strong recovery in the days ahead.