It looks as if KENNY KO is at it again as he spreads unfounded rumors about Calum von Moger as he previously did about Larry Wheels, Tavi Castro and many others.

UPDATE: February 6, 2020 – Calum Von Moger released his first official video statement on the matter which you can watch above.

In the latest stunt by KENNY KO (Kenny Boulet), the YouTuber is spreading the word that bodybuilder, actor, and influencer Calum von Moger has “ghosted” a young woman named Nicola Segura who claims to have given birth to his son.

Kenny released a video with Segura on his YouTube channel which smears Calum von Moger as a man trying to avoid his responsibilities as a father. In the video Kenny claims that Calum is trying to hide this from everyone which, according to the Australian bodybuilder’s legal representation, is false and as evidenced in the Ventura County Child Services report received February 4th 2020.

Calum’s legal team confirmed that the bodybuilder is still awaiting the results of a paternity test he had taken. With no confirmed results, the claim that Calum von Moger is trying to avoid his responsibilities is completely without merit.

Nicola Segura could be in major legal trouble due to this incident as well. By disclosing misinformation about a private family matter, Segura could be violating California State Law. She is also falsely claiming to have been in a long term relationship with Calum. Messages released by Calum von Moger to management clearly indicate otherwise and confirm a one night stand.

As of the time of this writing, Calum Von Moger’s legal team have sent out a cease and desist letter to both Kenny KO and Nicola Segura – which you can see below. 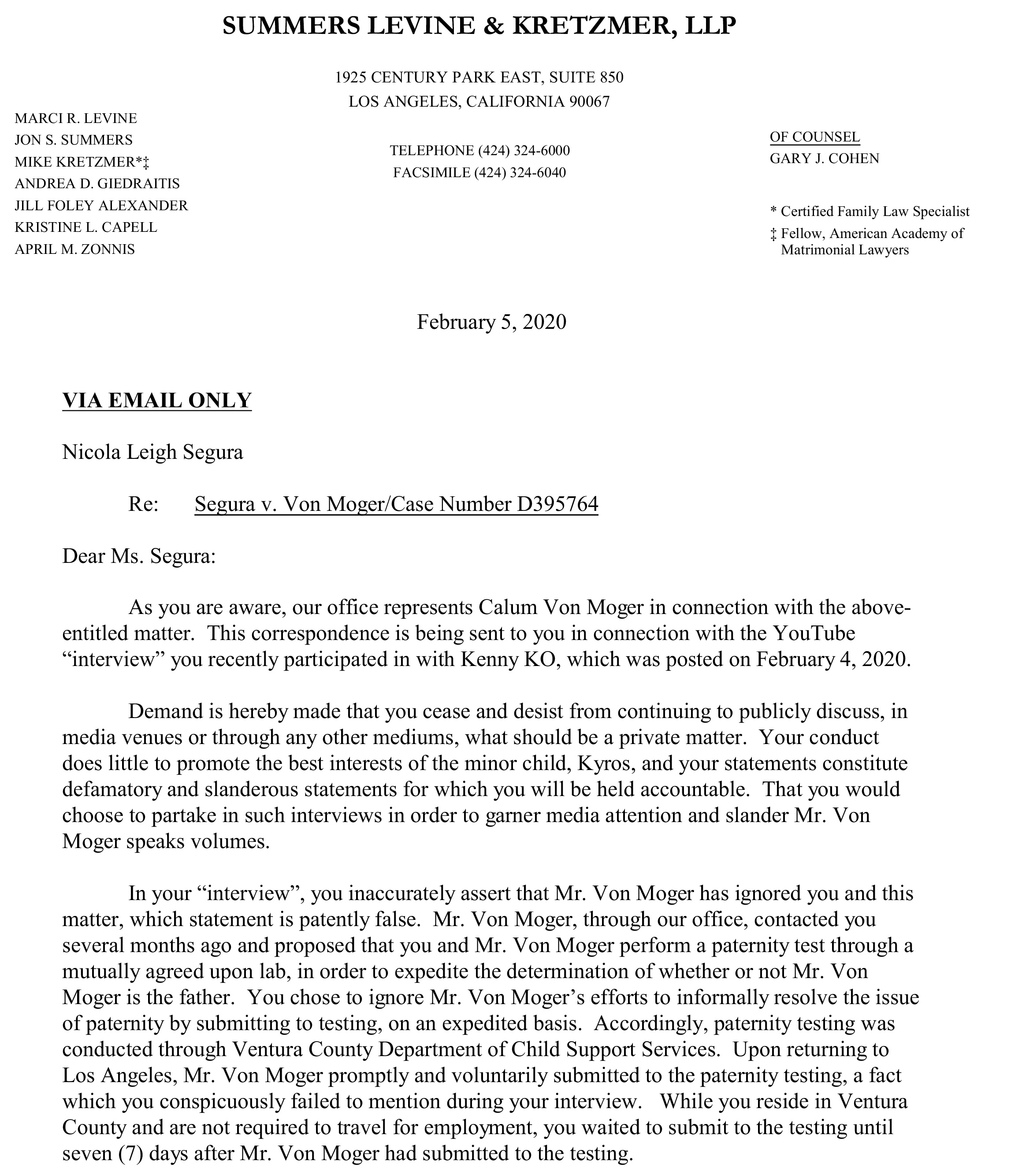 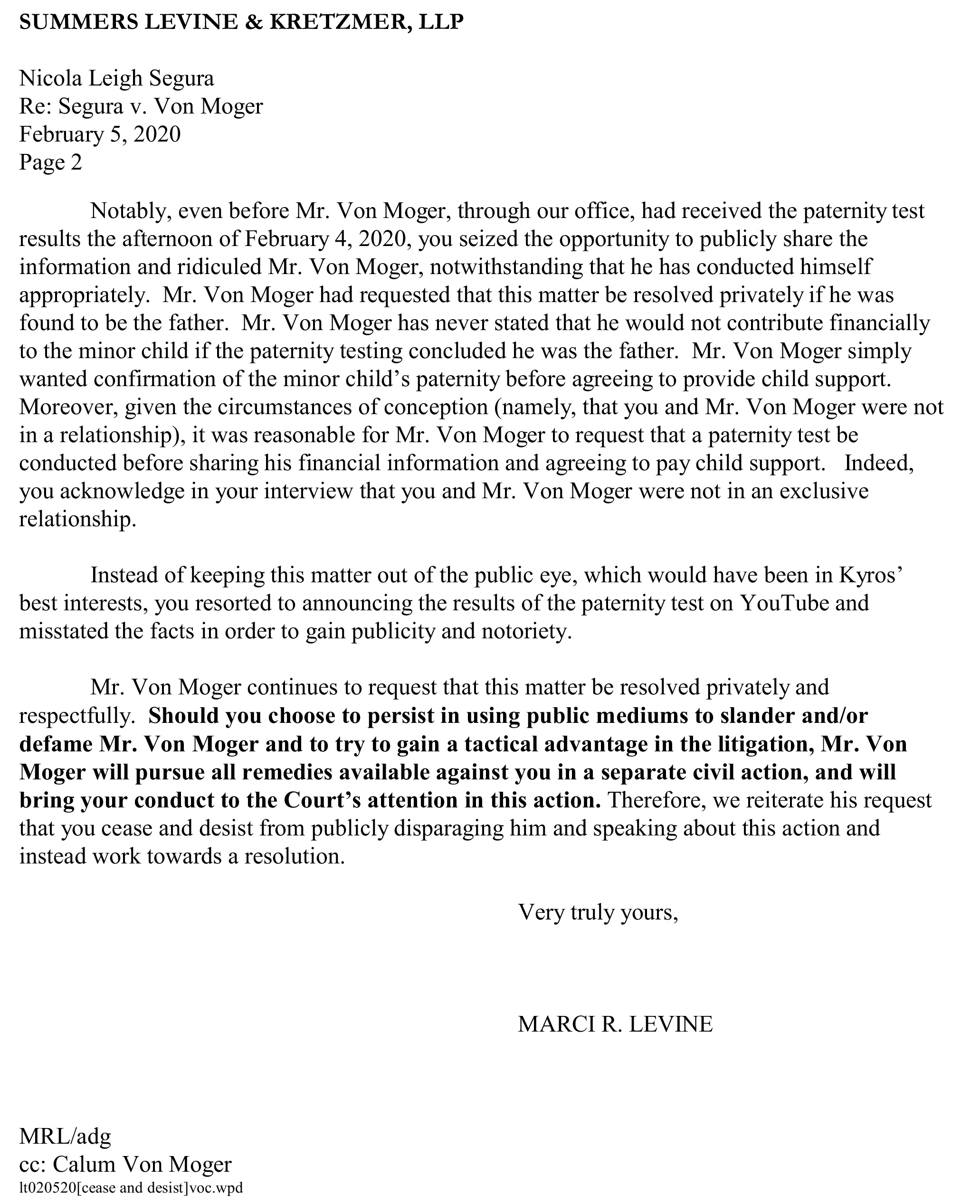 The letter goes on to state that Nicola’s “conduct does little to promote the best interests of the minor child, Kyros, and your statements constitute defamatory and slanderous statements for which you will be held accountable. That you would choose to partake in such interviews in order to garner media attention and slander Mr. Von Moger speaks volumes.”

It also makes clear that Calum Von Moger had willingly taken a paternity test, which was not mentioned at all during Kenny KO’s interview with Nicola, and furthermore that Nicola herself did not submit her end of the paternity test until seven days after Calum.

This isn’t the first time that Kenny has gone after high profile bodybuilders, NPC competitors, and IFBB Pros in the industry. Last year the YouTuber released an interview of himself and the ex-girlfriend of Larry Wheels, claiming that the powerlifter and bodybuilder had assaulted her. After evidence to the contrary came to light, Kenny was forced to apologize to Larry Wheels as he jumped the gun, painting the powerlifter as guilty before being proved innocent.

Kenny also caught flack in the case of the Tavi Castro controversy. While Tavi Castro had reached out to the YouTuber to request an interview, hoping to rebut a prior video featuring the bodybuilder and entrepreneur’s former business partner, KENNY chose to ignore Castro leaving a skewed view of the controversy.

KENNY KO has attacked and defamed athletes including Mike Rashid and Zac Aynsley, all without credible evidence. Jeremy Buendia sued Kenny KO forcing him to take down a defamatory video about the former Men’s Physique Olympia champion.

At this point Kenny KO is so morally and intellectually bankrupt that there is not a single major figure within the fitness industry that would want to work with him.

With the claims against Calum von Moger being completely unfounded and without credible evidence, it appears that KENNY KO could find himself making another retraction in the near future.

Generation Iron will continue to follow this case as the story develops.