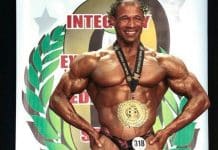 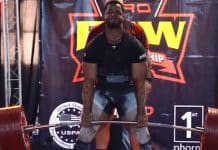 Lee Haney shares the only other bodybuilding physique that truly impressed and threatened him.

Lee Haney is a true legend with eight Mr. Olympia wins. A world record only to be tied by Ronnie Coleman years later. During Haney’s time, there was barely anyone else who could be a threat to his superior physique. But was there any competitors who made Haney worry? Was there a bodybuilding physique that was so impressive it threatened Haney’s confidence in his own chances for victory? In our latest GI Exclusive interview, Lee Haney reveals the only other bodybuilding physique that truly impressed him.

It might be hard to believe, but for Lee Haney, there were barely any other bodybuilding competitors that threatened his reign as an eight time Mr. Olympia champion. Looking back that’s clear to see – but it’s even more impressive that Haney wasn’t even worried at the time. He was so confident in his physique that he didn’t worry about any other competitor. Well, except for one other bodybuilder.

During our video conversation, we wanted to know what was the most impressive physique (besides himself) that he ever saw during his competitive years. He takes a moment to think as there were hardly any competitors that gave him worry. Ultimately, he lands on Matt Mendenhall.

Mendenhall was a promising young athlete who ultimately never was able to bring his talent to fruition. This was largely due to a string of tragic bad luck including a car accident that essentially derailed his entire competitive career.

Before tragedy took Matt Mendenhall’s career away from him – Lee Haney saw the potential in Mendenhall’s physique. He found it so impressive that not only was Haney impressed but he also worried that he might not be able to beat Mendenhall should he reach his prime.

Ultimately there would never be a dangerous clash between these two genetic phenoms. Lee Haney would never have to face off against a prime version of Mendenhall. Instead, it stands as a strong what if in the history of pro bodybuilding. Could Mendenhall have derailed Haney’s eight Olympia win streak? We’ll never know.

Beyond Mendenhall, Lee Haney also reflects on a competitor that didn’t have the genetic superiority to threaten Haney but certainly had the hunger. Rich Gaspari is a competitor that Haney believes was able to push past his own genetic limitations due to pure passion for the sport. Of course, Gaspari was never able to earn a Mr. Olympia title. But the mere fact that he still sits in bodybuilding history showcases a man who was able to overcome the “rules” of genetics in bodybuilding. It’s something that Lee Haney appears to deeply respect.

You can watch Lee Haney’s full comments on Matt Mendenhall and Rich Gaspari in our latest GI Exclusive interview segment above.