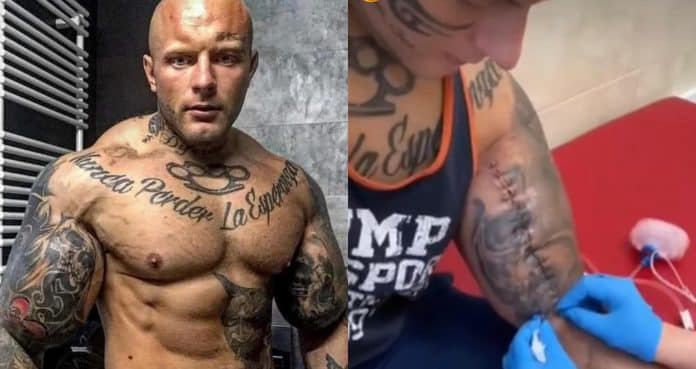 MMA fighter Szymon Komandos is an aspiring bodybuilder who became known for his large biceps. Recently, the Polish bodybuilder had to undergo surgeries to drain his arms because of his use of Synthol.

Komandos, who shared different videos on Instagram, suffered severe damage because of the substance in his arms. This is why he had to go through emergency procedures to prevent his muscles from deteriorating. The video on social media showed Komandos’ arm sewn up following surgery. The graphic footage showed doctors draining his biceps.

Following the visit, doctors revealed that there were no life-threatening complications. They seemed to catch it in time so there is no more serious damage done.

Szymon Komandos And Synthol Use

Synthol is a oil that is used in the sport of bodybuilding. Certain athletes have used this to make their muscles bigger, mainly in the biceps but also seen in calves and quads. The method adds a unique size and shape to the muscles but could be dangerous when the oils become solid.

Recently, there have been some speculation on synthol injections surrounding Hadi Choopan and Big Ramy. The two-time Olympia champ was seen during a physique update with a hole in his quad and Hany Rambod made a statement about the location.

To this point, Szymon Komandos seems to be doing well following the procedures and escaped any serious damage. Now, he will focus on recovering and getting his muscles to a healthier state.