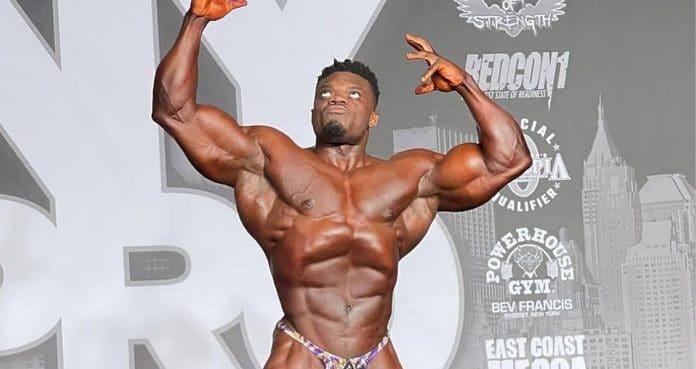 The 2022 New York Pro was next up on the schedule this season taking place on Saturday, May 21, 2022. Aside from the Olympia and Arnold classic, the New York Pro might be the biggest show over the course of the year. There were nine divisions fighting for titles on Saturday at the Marriott at Glenpointe in Teaneck, NJ looking to qualify for the 2022 Mr. Olympia. In the end, it was Blessing Awodibu highlighting the 2022 show with a victory in Men’s Open.

Awodibu came into the show as the favorite after winning the Indy Pro just last week. This was his return to the stage and now, he was looking for redemption at the NY Pro, where he finished sixth in 2021. There was a late shakeup as Indy Pro runner-up Charles Griffen decided to pull out of the event on Friday.

Sadik Hadzovic also returned to the stage in New Jersey after his Men’s Physique victory in Men’s Physique. Despite already holding a ticket to the Olympia, Hadzovic wanted to prove that he is ready for the biggest stage. Lauralie Chapados was victorious in Bikini while Neil Currey won Classic Physique.

The full results from the show have been announced. There were a total of nine divisions present during the New York Pro. Checkout the full breakdown from each event along with the official scorecards from the night.

Blessing Awodibu has always found success outside of Bodybuilding. After going Pro, Blessings spoke at length with Generation Iron and explained his plan to not only become Mr. Olympia but to also change the face of bodybuilding. His win at the NY Pro demonstrated a great physique with muscle mass. His rivalry with IFBB Pro Nick Walker was reignited when he let Walker and the audience at the 2022 NY Pro know that he looks forward to a rematch at the 2022 Olympia. He predicted he would beat Walker and looked forward to his Olympia debut.

Andrea Presti is well known for his big win at The 2021 Mr. Big Evolution Pro in Portugal after beating out top competition such as Tim Budesheim and Vlad Suhoruchko. Going into the 2022 NY Pro, Presti was not a favorite to win the show but he was the most improved in the division. He was able to significantly improve his legs and earn points towards an Olympia qualification.

Last year Generation Iron had the pleasure of interviewing Blessing Awodibu before his battle at the 2021 New York Pro. He ultimately didn’t take home the first place prize that year – after much hype leading into the competition. His win this year is a sort of vengeance compared to his package last year. Awodibu has shown incredible improvement – that has been catching many people’s eye including Johnnie O. Jackson as well.

In the above interview, you can gain some insight into Blessing Awodibu’s view on trash talk and hype before a bodybuilding show, the future of the sport, its physiques, and much more. 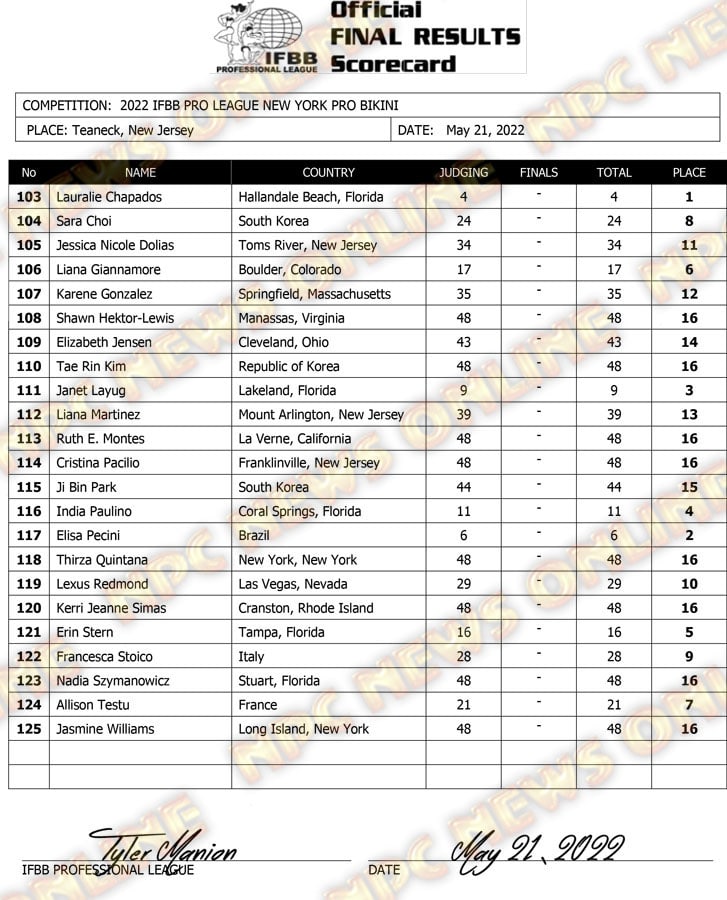 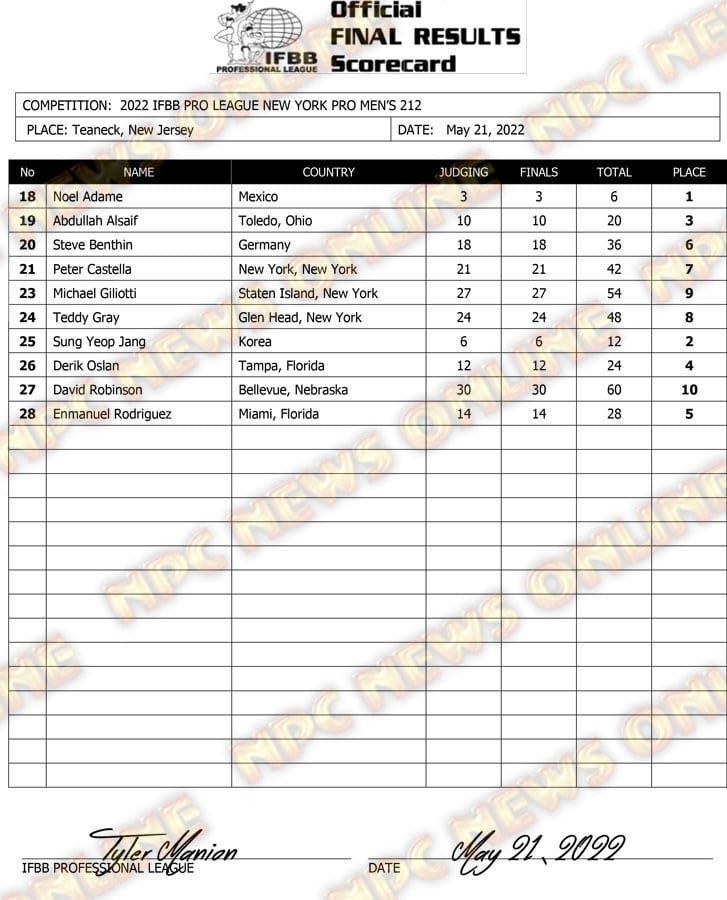 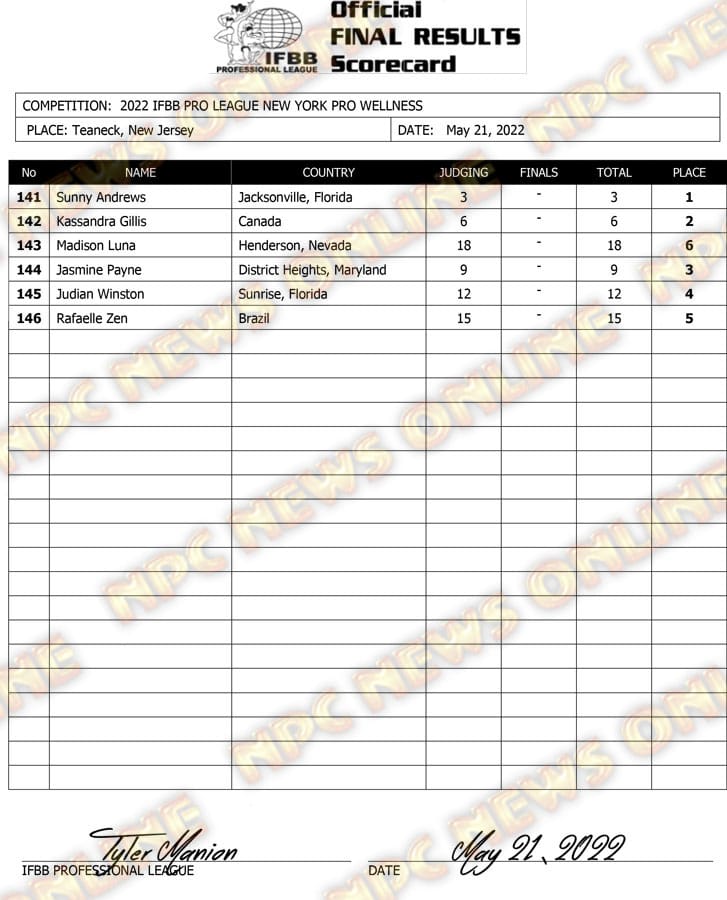 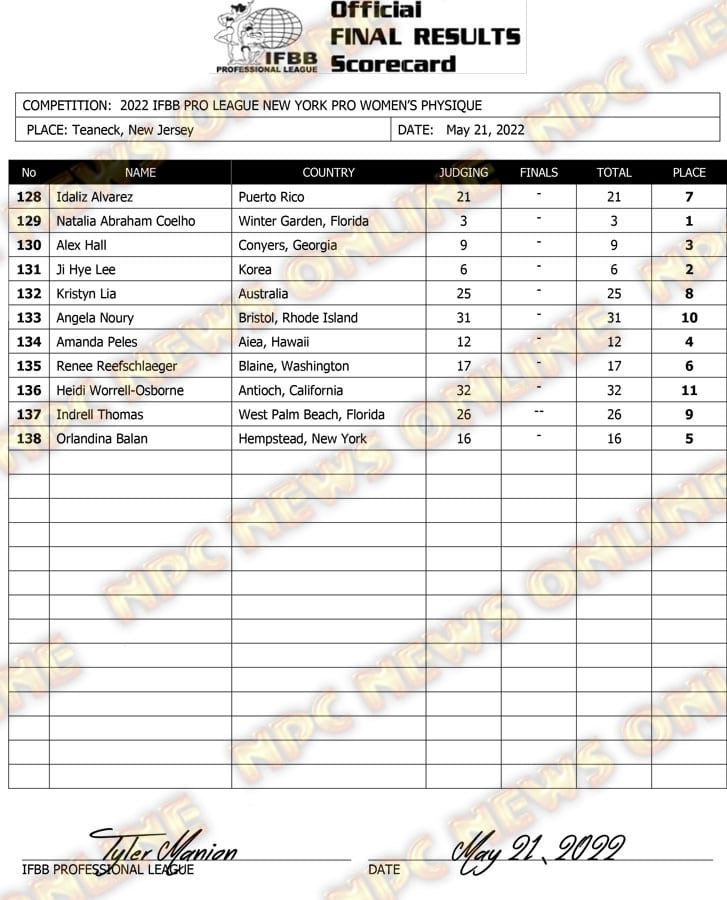 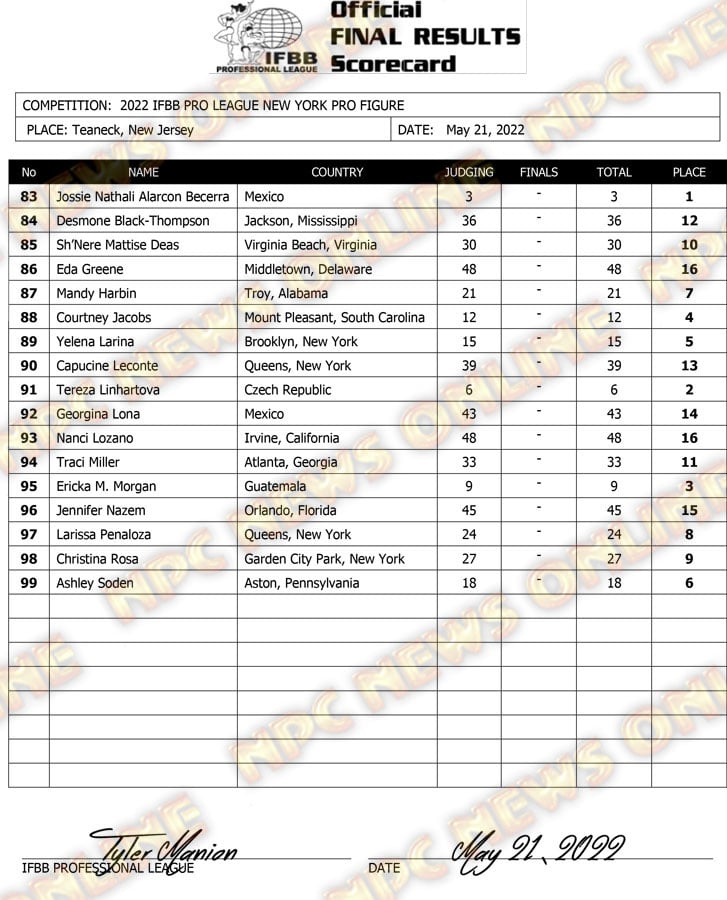 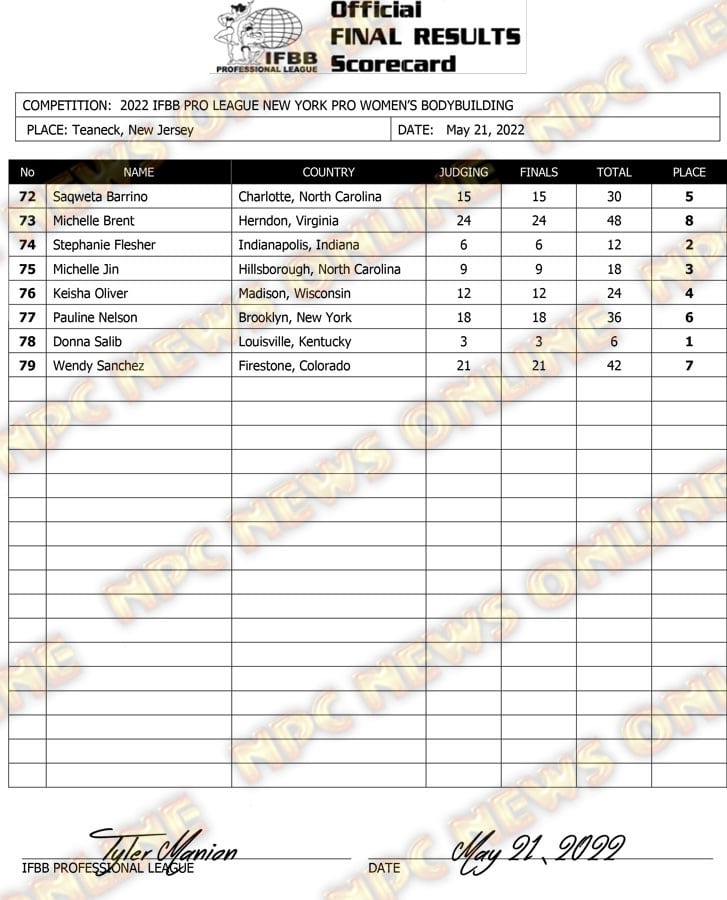 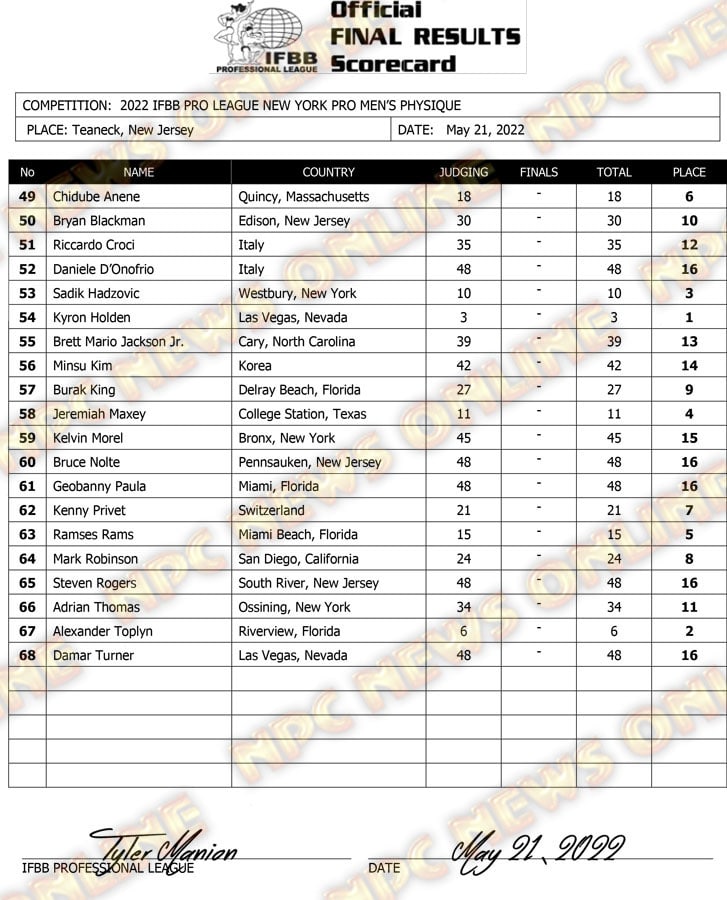 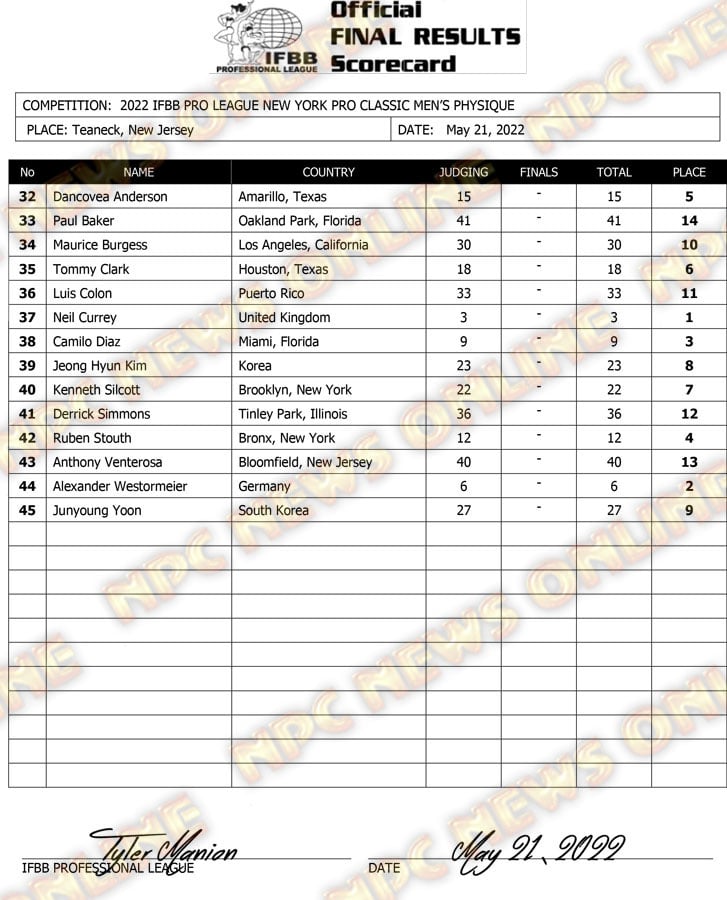 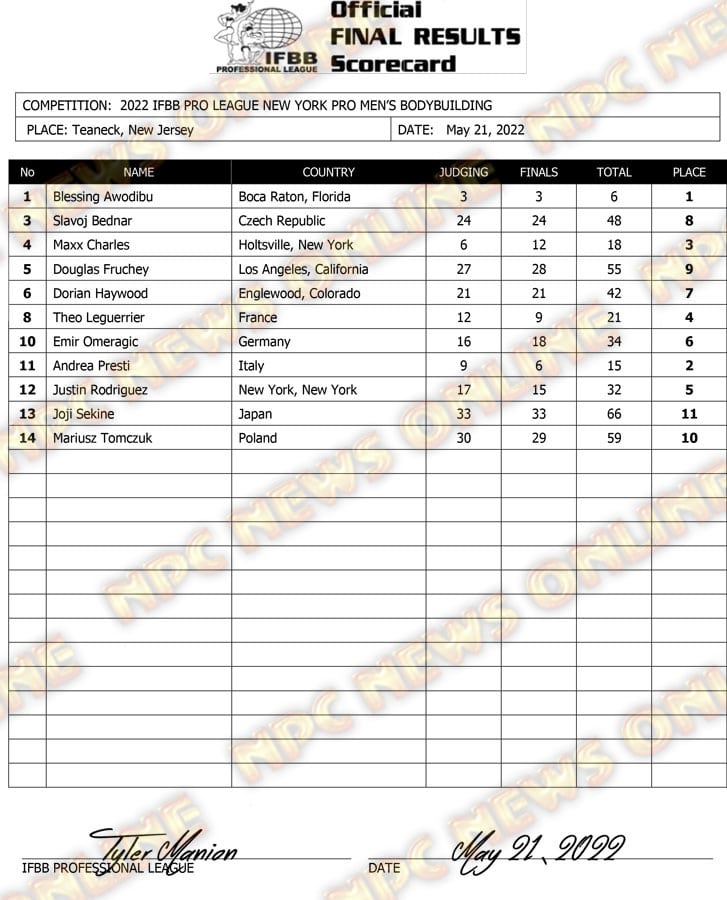 Generation Iron wishes to congratulate all the great athletes who earned a win at the 2022 IFBB New York Pro. Make sure to check out our full IFBB Pro results page from this year and previous years right here to catch up on any action you may have missed! 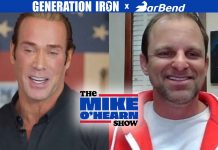 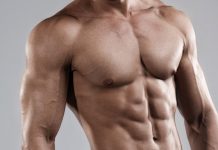