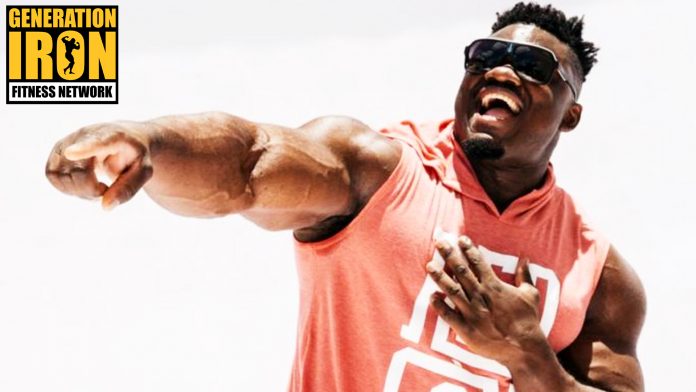 Blessing Awodibu plans to change the face of bodybuilding and 100% believes he will be Mr. Olympia in the future.

Blessing Awodibu is a bodybuilder who found success outside of a pro career. His humorous videos and viral internet presence brought him a massive following. That following combined with his mass monster physique made him a powerful force in the bodybuilding industry. Now he’s about to go pro – which could bring him even more attention and success. In our latest GI Exclusive interview, Blessing Awodibu explains his plan to not only become Mr. Olympia but to also change the face of bodybuilding.

If there’s one thing you can’t deny about Blessing Awodibu, is that he knows how to hype himself up. Not only that, but he knows how to hype up the competition that he’ll be competing in. Since he announced he would be competing in the New York Pro 2021, he has showcased a charisma and trash talk that has both excited the community and caused controversy. At the end of the day, good or bad, it’s brought a lot more talk about the New York Pro in the early months before it commences in May.

This tactic is no stranger to Blessing Awodibu, as it’s the very thing he’s been doing to build his viral internet presence since before his entrance into the pro circuit. His intense personality made him a bodybuilding influencer. He’s taking those tactics into his build up to bodybuilding competitions.

During our conversation, we asked Blessing Awodibu why he decided to go pro. He already had plenty of followers and could have gone down the path of a bodybuilding influencer. His brand is strong and his videos do well. He was already finding success without the pro card.

Watch our latest GI Exclusive segment with Blessing Awodibu above!

Blessing agrees but he can’t help but need to go pro. He is passionate about bodybuilding more than anything else. So the opportunity to go pro and make a statement in the competitive world was a must.

It seems that a big part of that is taking what made him successful on the internet and bring it into the competitions themselves. Perhaps most similar to something like WWE, the drama, rivalries, and trash talk help bring excitement before the actual battles on stage. To create emotional stakes for different personalities bring in more drama to who wins and who loses.

At the end of the day, the victor goes to the best physique. That will always remain true. But to fold in more human emotion and drama throughout the lead up to the competitions can take the excitement to the next level. It makes sense to some degree, some of the most memorable bodybuilding moments involve rivalries. Face-offs that include Ronnie Coleman vs Jay Cutler, Phil Heath vs Kai Greene, and Arnold Schwarzenegger vs Lou Ferrigno in Pumping Iron.

As the world becomes increasingly more digital with a focus on video that can be streamed across the world, the tactics that have worked for movies comes to mind. The more of a narrative that can go behind each big competition and the athletes competing in it, the more drama and excitement we see in the stakes.

Blessing Awodibu believes he can bring that to bodybuilding. He believes “100%” that he will become a Mr. Olympia champion. If he achieves this – he will use that spotlight to bring hype and drama to the competition. To bring a narrative that helps fans interact with the sport even more.

You can watch Blessing Awodibu talk about his plans to change bodybuilding in more detail by watching our GI Exclusive interview segment above.