Most bodybuilders possess a significant aversion to anything other than free-weights and cable machines. While standard gym equipment is undeniably the foundation of bodybuilding training, some interesting tools have come into vogue recently that have legitimate application. On the recovery side of things, methods like hyperbaric and graston have exploded in popularity, yet there has been a remarkable lack of enthusiasm for new training tools.

Every physical discipline has its shortcomings. With bodybuilding, one of the major problems from a kinesiological perspective is the necessity of muscle isolation. Targeting individual muscles is virtually indispensable when the goal is shaping the body, but the reality is that pure muscular isolation is not how humans evolved to operate- certainly not with high weights, and certainly not with the thousands of repetitions a month. Nowhere in nature or even athletics is muscular isolation a virtue. In fact, one of the reasons scientists speculate that animals like apes, which are remarkably similar to humans genetically, have so much more athleticism is they lack the fine motor control to isolate muscles efficiently.

Another weakness of bodybuilding training is that it focuses on primarily across two planes of movement – frontal and horizontal (think bench press and bicep curl). Now this is balanced when compared to something like Crossfit which is almost exclusively horizontal (think Olympic lifting and muscle ups), but still neglects one of the primary dimensions of movement- saggital. Of course there are many causes of joint pain, but taxing a joint repeatedly in unbalanced ways is a reliable method to develop it. 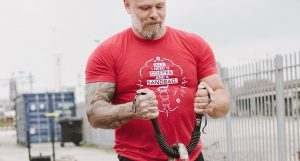 The most basic way to use the pec stick is with an under or overhand grip. You bend it inwards, either for repetition or a static hold. Because the pec stick essentially functions like a spring, it gives active feedback into the muscles even during isolation, creating a massive pump. Just make sure that whatever brand of stick you chose, you also select a weight resistance that’s right for your goals.

The pec stick will train your shoulders through the saggital plane, offering them more balanced function and potentially appearance. To be clear, shoulder is the joint it works through, but it primarily taxes the pec rather than the delt, specifically the sterno-costal (lower) head, as opposed to the clavicular (upper head) that causes so much shoulder pathology.

It also encourages recruitment of stabilizer muscles like the teres major and inside head of the bicep. Have you ever noticed, that the more weight you bicep curl, the more you need to engage your chest? This isn’t necessarily a bad thing, muscles can be trained in groups too – it’s how they were designed to work. The pec stick will help create healthy shoulders and a big lower chest. It’s cheap and a great tool for the home of any bodybuilder.