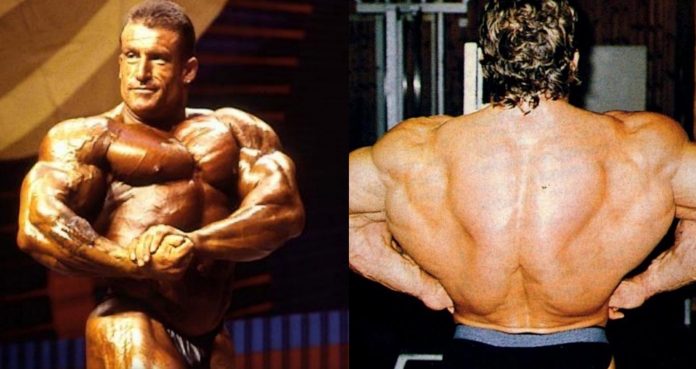 Dorian Yates teaches you how to build a legendary back.

Dorian Yates built a massive back during his bodybuilding career. He was able to not only change the game, but dominate the game during his heyday. Now the six-time Olympia champion is looking to pass on the knowledge he has learned to the next generation.

Dorian Yates is a legend for a great deal of reasons. He’s the first bodybuilder to truly redefine the the game after the Lee Haney era. Yates completely transformed the idea of what a bodybuilder can become. Not only did he have great conditioning, but he was able to build more muscle than was thought possible for a bodybuilder in his era. He effectively became the first mass monster.

Since Dorian Yates transformed his physique, countless others during his era followed suit. Seeing no other way to compete with the mass monster, they had no other choice to become mass monsters themselves. If we look at modern day bodybuilders we can see that Yates was a major influence on the game.

Alongside Ronnie Coleman, Dorian Yates has influenced many modern bodybuilders to become mass monsters. But building muscle isn’t simply enough. For Yates it wasn’t just about packing on the muscle but doing it the right way. After all, you can’t be Mr. Olympia if you just have muscle alone. If that were true, competitors like Paul Dillet would have been champion many times over.

What Dorian Yates was able to bring to the game was a very specific method of presentation well documented in his biography and life story, “Dorian Yates The Original Mass Monster.” Presentation and high level training.

Now that he’s left competitive bodybuilding in his rearview, Dorian Yates has been exploring other ventures. These days the yogi and psychedelics enthusiast is looking to pass on what he has learned. So of course that means Yates has decided to share his knowledge of building muscle to the masses.

One of his most attributes in his heyday was his massive back. In a recent post on his social media, Dorian Yates details exactly how he was able to build his back with the barbell row. If you’re looking to get the back of a legend, then this short instructional is something you’ll want to check out.

Barbell rows were pretty much a staple in my back workouts.

An important tip here is to keep your eyes up and look ahead, this way you’ll be keeping your back straight and there shouldn’t be rounding in the back. This is more of a power movement but the form should remain intact with no leg movement.

Think of your hands as hooks and you should be rowing with your elbows.

Would you try Dorian Yates’ back training? Dorian Yates kept rigorous and detailed journals throughout his entire bodybuilding career dating back as early as his first competition. For the first time in history, Dorian’s journals have been published highlighting select passages between 1985-1990. We highly recommend the Dorian Yates E-Book which contains over 100 pages of actual writings by Dorian Yates as he trained towards becoming a Mr. Olympia champion and legend.