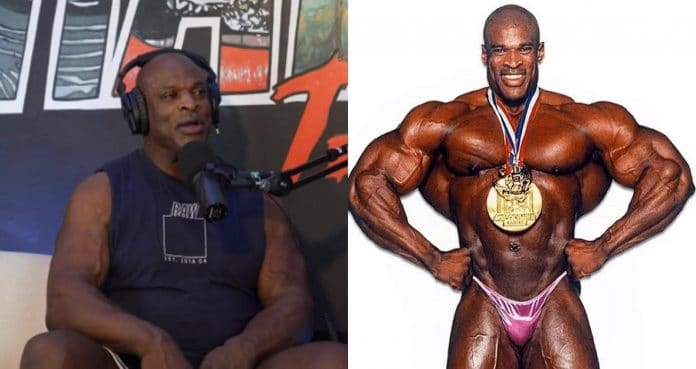 Ronnie Coleman recently addressed the deaths in bodybuilding and reflected on an experience of his own.

Ronnie Coleman is one of the best bodybuilders to ever step on stage and his resume backs it up. Coleman is an eight-time Olympia champion, which is tied for the most all-time with Lee Haney. To this day, Coleman remains an influential voice in bodybuilding because of his knowledge of the sport. Coleman recently discussed the recent deaths in bodybuilding and reflected on an experience of his own.

Coleman joined Bradley Martyn to discuss the recent happenings around bodybuilding. Unfortunately, there has been a string of deaths that has hit the world hard. Shawn Rhoden and George Peterson passed away last year. Recently, Cedric McMillan suddenly died and this shifted conversations further toward the health concerns in bodybuilding.

Ronnie Coleman knows a thing or two about preparing for shows and what it takes to be the best in the world. During his time, there was not this many deaths and it is because there used to be testing for substances such as diuretics.

“It’s kind of hard, you know when I was coming up, we had one guy die and they started drug testing every show. He died of diuretics of course, you know. So they started drug testing for diuretics every show, and nobody died or nothing, until they stopped. I’ll never forget when they stopped. He died in 1996 I think. (Mohammed) Benaziza, he died on the European Tour. I know I wasn’t there, I wasn’t Mr. Olympia back then. They drug tested every single show after that in the IFBB.”

“When Jay failed the test, they, because Jay told them he was going to sue them. They was like, okay, well we won’t keep testing, and you get the chance to keep your prize money too. We will just do away with the testing. Jay changed that. They didn’t test no more after that.”

Ronnie Coleman and the 2001 Olympia

Ronnie Coleman knows the dangers of diuretics firsthand and it was at its worst in 2001. This is the season Coleman became the first competitor to win the Arnold Classic and Olympia in the same year. Despite his success, the Olympia victory almost didn’t happen.

Coleman reflects on waking up the morning of the Olympia competition feeling extremely dehydrated and wanting to go to the hospital.

“When you start dying, this sport is not worth dying for. Ronnie laughs. Not at all. I remember back in 2001, I’ll never forget it like it was yesterday. I woke up the morning of the Olympia and I felt awful. I was totally dehydrated, you know, you have to be kind of a little dehydrated to get up there on stage,” Coleman explained.

Ronnie Coleman was able to hydrate enough to get on stage and defeated Cutler to keep his Olympia streak going. This opened Coleman’s eyes and he did not want to have this problem again moving forward.

Many have discussed how to improve the health of bodybuilding. Since McMillan passed away, competitors and powerlifters have been going to get checked out to make sure their health is in a good position. This is a growing problem and it will be interesting to see how it is handled moving forward.