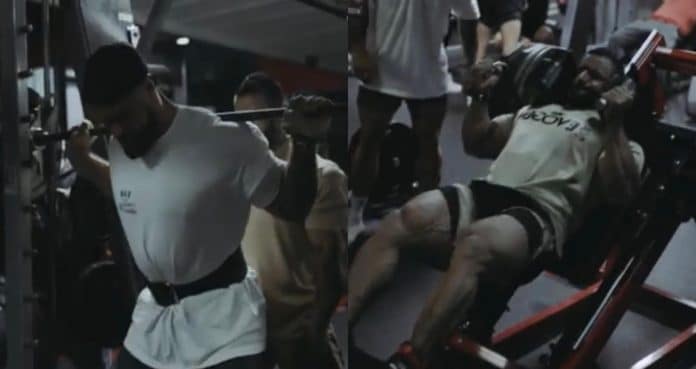 Chris Bumstead has been active, sharing different workouts and diets as he prepares to win his fourth consecutive Classic Physique Olympia title. Bumstead began working with Hany Rambod and was joined by his coach for a quad-focused leg day. Bumstead was not alone in the gym as Hadi Choopan also made an appearance for the workout.

Both Bumstead and Choopan are expected to be contenders in their respective divisions. Choopan finished third at the 2021 Olympia in Men’s Open, a division that many believe he could have won. Now, the group is deeper than ever so Choopan will have to come in at his best.

As for Bumstead, he is the favorite to win once again in Classic Physique. He won the title back in 2019 and has not relinquished it since.

Choopan has been in America preparing for the 2022 Olympia and joined Bumstead and Rambod for a huge workout in Southlake, Texas.

The workout began with leg extensions. Chris Bumstead has discussed some knee issues in the past and this workout can be strenuous on the knees. On the other hand, it is one of the best workouts to pump the quads and is. great warmup because of the way it gets the blood flowing. The duo does not lock out their knees during sets and hit a few working before moving on.

Working out with Choopan is familiar territory for Bumstead.

“I trained my whole life with Iain (Valliere). So I always train like an Open bodybuilder. I’m training for the Open as always. But training with Hadi reminds of training with Iain who’s stronger than me.”

Next up, Smith Machine squats. Hany Rambod had Hadi Choopan perform front squats while Chris Bumstead performed back squats. This is because he wants the Classic Physique competitor to work on his hips.

“I want you to work on your hips a little bit and we’re going to do back squats because that’s going to be easier for you and that’s how your biomechanics are dialed in,” Rambod said.

Hack squats are an exercise that focuses on the quads but are good for all muscles in the lower body. The duo did some warmup sets before hitting heavy working sets. The amount of sets and reps were not specified in the video.

Bumstead shared that he was taking a plate of two off so he did not go super heavy. He wanted to leave some left in the tank for the rest of the workout.

Leg Press was a heavy exercise for both athletes. Rambod wanted to really hit the quads hard on this machine and explained why.

The next exercise on the list was walking lunges. Bumstead opted to perform this exercise with dumbbells while Choopan used a barbell. They then moved onto seated leg curls for some hamstring work. Once the quads were finished, the two began hitting some other parts of the leg.

While this was a quad-focused workout, Chris Bumstead and Hadi Choopan did not leave it here. They finished up with some standing calf raises and hip adductions on the machine.