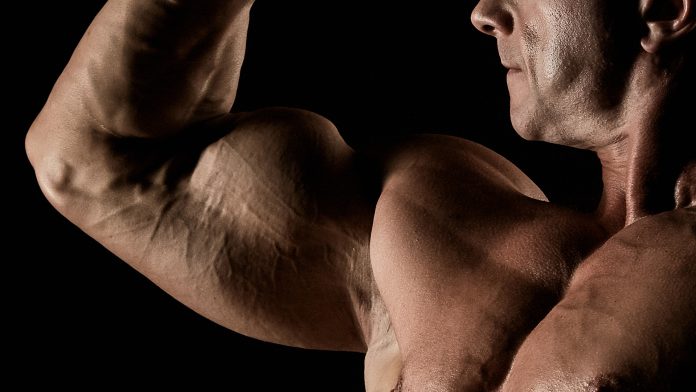 While the preacher curl should not replace the conventional bicep curl entirely, it should be used alongside it as it targets the biceps in a different manner.

The preacher bench and machine have been designed to isolate the biceps entirely by placing the upper arms in firm contact with the sloping bench.

There are multiple pieces of resistance kit that can be when performing the preacher curl – dumbbells, barbells or EZ-bars.

Due to the position that the arms are placed in, it is crucial that the movements are kept smooth, slow and under control.

As a result, when performing the preacher curl, it is important that you use a lighter weight than you use for conventional bicep curls.

Excessively heavy weights will not facilitate safe, controlled movement thus failing to maximize the benefits of the exercise and increasing the risk of injury.

To perform the preacher curl, work through the following steps.

1) Adjust the seat on the preacher bench so that your armpits align with the top of the bench when the arms are placed on the bench.

2) Ensure that the upper arms are fully in contact with the bench and extend the arms entirely. Grip the weight using a supinated grip (palms up).

3) From this position, curl the weight upward while keeping the upper arms in contact with the bench. Bring the bar up until the forearms are in a vertical position.

4) At the top of the movement, pause for a second and actively squeeze the biceps. Drop the weight back down in a controlled manner counting for three seconds until the arms are fully extended once again.

Throughout the entire exercise, ensure that the feet remain pressed into the floor, chest lifted and the shoulders held in the same position.

There are a number of benefits associated with regularly performing the preacher curl. The preacher curl should predominantly be used as an accessory exercise in your training.

When considering the number of sets and reps to complete, for maximal growth it is recommended to complete between 6 – 12 reps per set (1).

If your goal is to build significant muscle size in the arms, consider your training volume and perform arm exercises regularly. Training volume has been found to be the most influential factor for muscle growth (2).

There have been many studies completed on the effectiveness of the preacher curl. It has been found that preacher curls highly activate the biceps and is, therefore, an excellent exercise choice.

In addition, it is recommended that an EZ-bar is used when performing the preacher curl as this will lead to maximal activation of the biceps (3).

This high degree of bicep activation places a great degree of stress on the muscle and helps build balanced biceps. This application of stress will cause the biceps to adapt rapidly and increase in size and strength.

The biceps are activated highly in the preacher curl primarily because the exercise effectively isolates the biceps by placing the upper arm directly on the bench; this prevents movement around the shoulder.

For the all bicep isolation exercises movement should only occur around the elbow joint considering that the contraction of the biceps causes elbow flexion.

However, for a number of these exercises, form can become compromised, especially as fatigue increases. Individuals may find that the shoulders or hips begin to move to assist in the movement.

Allowing movement to occur in any other joint out with the biceps will reduce the amount of stress on the biceps and place it on other muscles.

Reducing the amount of stress placed on the muscle is less than ideal as it will not facilitate maximal muscle growth.

With the preacher curl, due to the design of the bench, it is practically impossible to move through the shoulder and the seat position negates assistance from the lower body thus maximizing bicep stress. 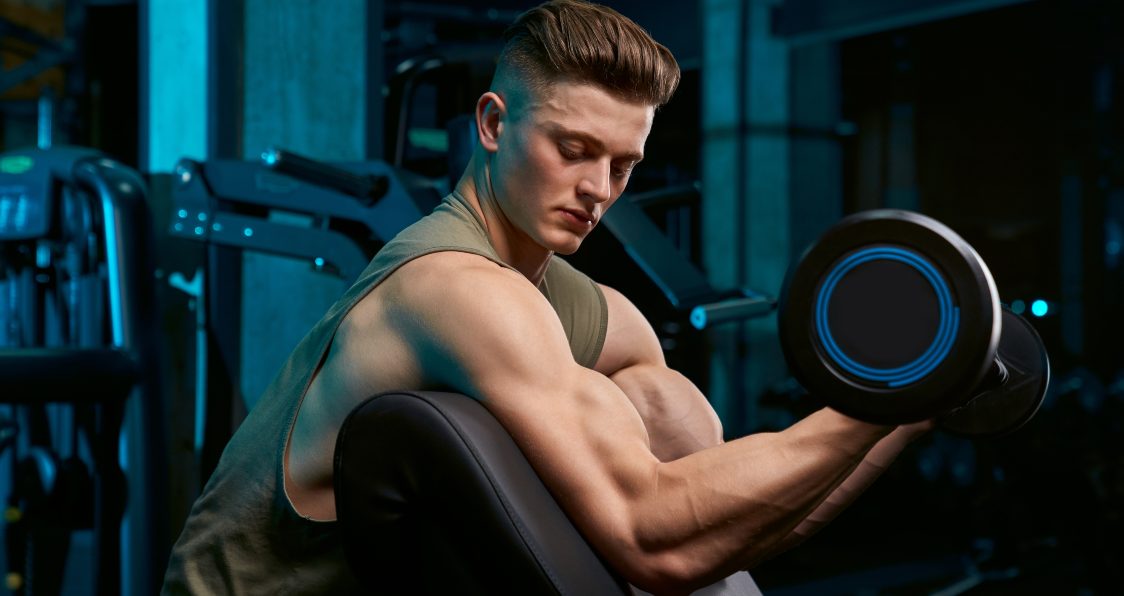 A further benefit of the preacher curl is that it can facilitate an improved performance for a number of compound exercises.

Specifically, there are a number of back exercises that use the biceps  – lat pulldowns, rows and chin-ups, for example. This explains why back and biceps are commonly exercised on the same day.

While the biceps play a secondary role in a number of these exercises, increasing the amount of force that the biceps can produce may allow you to lift a greater amount of weight.

The greater the amount of weight that can be lifted, the greater the adaptation is likely to be. Therefore, increasing bicep strength may have a consequent impact on a number of other muscles.

Finally, regularly performing the preacher curl and consequently building strength and size in the biceps will not only improve aesthetics but will also promote the function and health of the elbow joint.

The biceps must concentrically contract in order to bring about elbow flexion. They also have an accessory role as they lengthen to assist the triceps during elbow extension.

By strengthening the arm muscles through exercises such as the preacher curl, the risk of sustaining an injury to the elbow joint is much reduced.

This is extremely important when it comes to heavy lifting, especially with compound exercises, where the elbow joints may be subjected to a substantial amount of force. 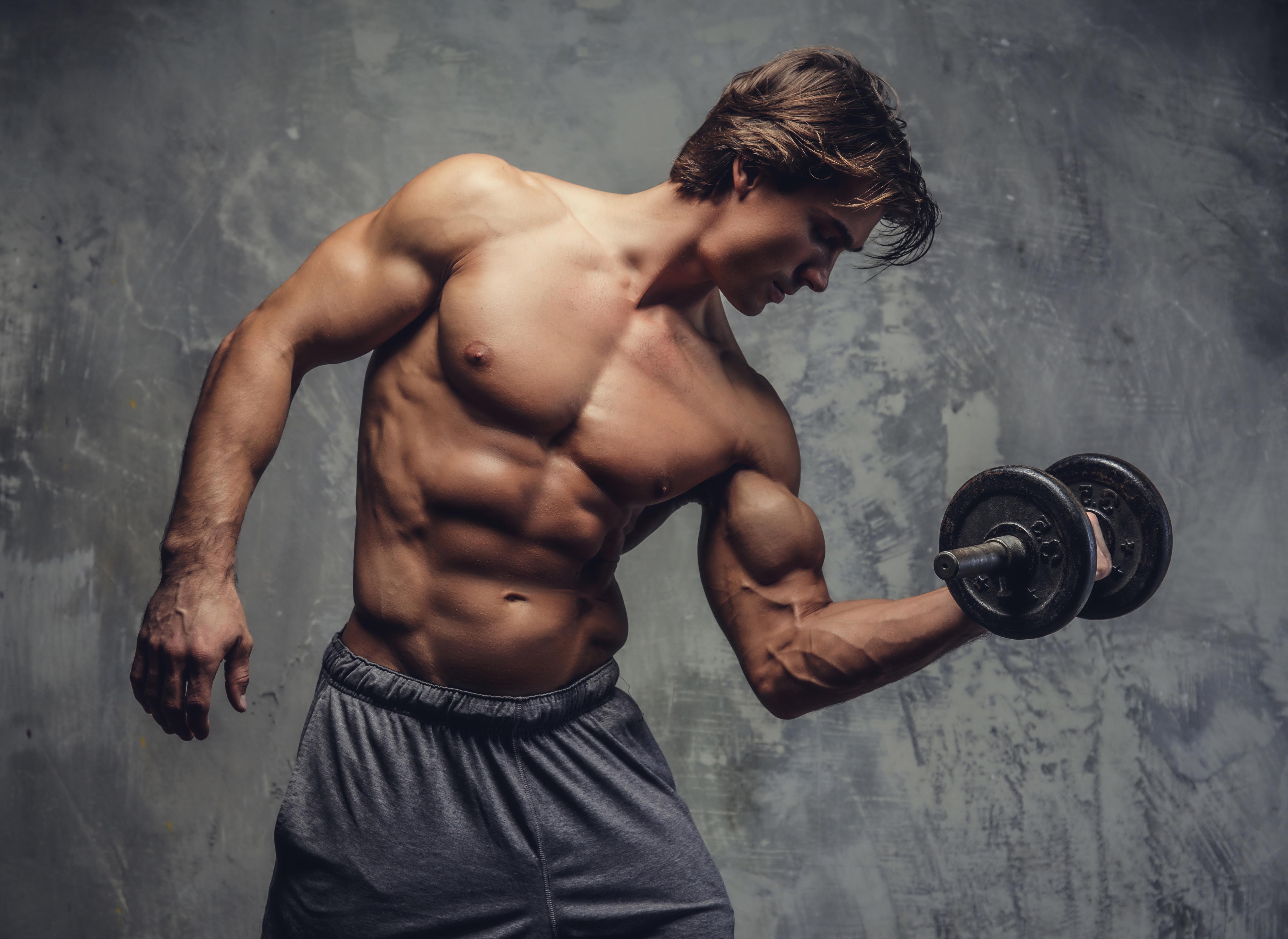 Removing the involvement of the thumbs in any curling exercise places a greater demand on grip strength. Not only will grip strength develop with this variation, but forearm strength and size too.

Before advancing onto this variation, it is important that you are proficient with the conventional preacher curl.

Ideally, use an EZ-bar for the thumbless variation, however, if you do not have an EZ-bar available a barbell or dumbbells will suffice.

The set-up for this variation is the same as the conventional curl, the only difference being the grip that is used on the weight.

Instead of a supinated grip, this time grip the bar using an overhand, pronated grip using only the fingers.

A second variation that also effectively works the biceps and forearm muscles is the zottman preacher curl.

The conventional zottman curl uses a rotating grip to apply stress to the arms. When placing the arms on a preacher bench, the forearms must still work but the focus moves primarily to the biceps.

Considering that a rotatable grip is not possible on a bar, dumbbells must be used for this variation.

Start by setting up on the preacher bench as normal while holding two dumbbells at top position by the shoulders.

Starting with the dumbbells in a supinated grip, lower the weights under control until the arm is fully extended. Upon reaching the bottom position, rotate the grip so that the hands become protonated.

Drive the dumbbells back up to the starting position. Remember to pause for a second at the top of every rep and lower the load back down in a three-second period.

There is great benefit to be found in performing unilateral exercises when it comes to muscle growth and strength development (4).

Furthermore, unilateral exercises can be used to effectively identify and remove any imbalances in strength that may exist.

Humans typically have a dominant side and therefore, imbalances between the right and left side are not uncommon. In addition, injury can also cause lead to an imbalance between sides.

Bilateral exercises will not work to iron out these imbalances and may actually contribute towards the imbalance. This is because the stronger side can actually mask the imbalance.

Unilateral exercise allows you to work either side individually and remove interference from the strong side. If an imbalance is evident, unilateral exercises can then be used to rectify it.

For the unilateral preacher curl, use a dumbbell. Set up as normal on the preacher bench and complete a number of reps using one arm. Swap the dumbbell to the other arm and then look to complete the same number of reps.

Another option would be to hold dumbbells in both hands and alternate between right and left arm until the prescribed number of reps have been completed.

When it comes to comprehensive bicep development, it is important that a range of curling exercises are selected. The preacher curl is one example of a bicep curling variation that will effectively bring about changes in muscle strength and size.