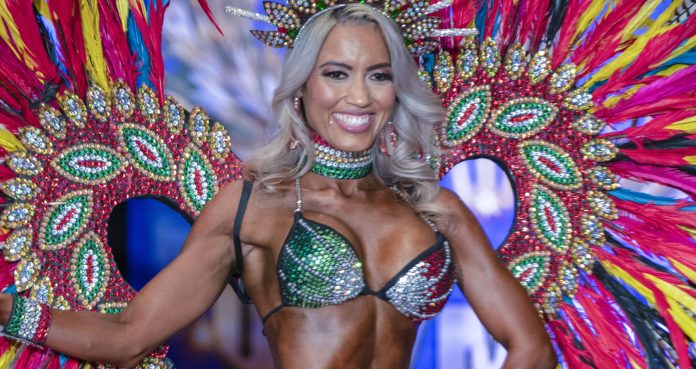 Natural Olympia Bikini Angels champ Arely Ayala cuts her calories in half during the bodybuilding season.

During the offseason, bodybuilders use that time to build muscle in a caloric surplus. However, in-season, they’ll cut their calories back to a caloric deficit to focus on losing body fat. Professional Natural Bodybuilding Association (PNBA) athlete Arely Ayala gives insight into what that shift in calories during the bodybuilding season looks like for natural athletes.

Arely Ayala competes in the Bikini Angels and Bikini Divas International Natural Bodybuilding (INBA)/PNBA league. She was the Bikini Angels category champion and placed second in Bikini Divas at 2021 Natural Olympia. And she’s the first international athlete to sign a multi-media contract with Generation Iron, Iron Man Magazine, and the INBA PNBA.

“Out of season, my caloric intake is high to grow muscle, always respecting my macronutrients – protein, carbohydrates, and fat – and i eat all vegetables and fruits and enough water. and i reduce my caloric intake by 50% or more during the season and increase my physical activity.”

Arely Ayala still eats healthy foods during the INBA PNBA natural bodybuilding offseason; however, she eats twice as much to focus on building muscle.

Bodybuilders will load up on calories during the offseason since this is the period where they have enough time to build muscle. Some athletes’ foods stay the same, while others are more flexible with what they eat during the offseason. However, their nutrition targets are entirely different.

Arely Ayala isn’t the only athlete to share how low their calories can go when prepping for shows. For example, PNBA natural bodybuilder Ben Howard disclosed the ill side effects of cutting calories low during contest prep. Howard mentioned many negative health consequences of extreme dietings, such as sleep disturbance and only getting a couple of hours of sleep a night.

That’s why multi-media athlete and Natural Olympia champ Brandon Lirio says it’s imperative to give your body a break from cutting and allow it to go into a caloric surplus to rebalance your hormones. Moreover, the first-ever Natural Olympia champ, John Hansen, says that eating a lot of calories is paramount to getting big.

Natural bodybuilders must rely on a well-structured nutrition strategy during the in-season and offseason since they can’t take any performance-enhancing drugs (PEDs). PEDs such as steroids will allow athletes more wiggle room to cheat on their diets and still make extraordinary gains. But, of course, they have harmful effects on your body.

PEDs is why many bodybuilders have opted to compete in the INBA PNBA league, making competition safe and just. The INBA PNBA league have a strict no drug use policy. For example, last year’s Natural Olympia Women’s Bodybuilding champ Jill Kolivoski failed a drug test. As a result, she was stripped of her title and prize money and banned from competing.