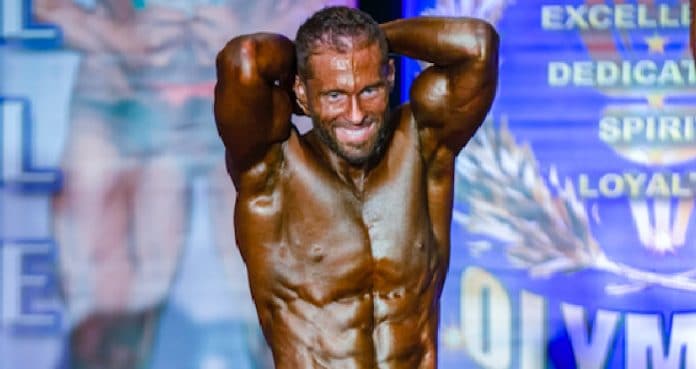 “Competing every 3 years gives me long enough of an off season to gain significant muscle, completely regulate hormones and have them at optimal levels, increase strength, and get hunger levels to where they are basically non existent

He acknowledges that growing muscle naturally takes time, so he implements this strategy. First, however, he believes you should get comfortable holding onto extra body fat to improve your physique for most of the year. You can see Mike Pucci diving into the detail of this bulking cycle and a photo of him during in-season and out of season below.

Mike Pucci says he spends 90% of the time hanging on to more body fat. But, because he sees it as imperative for maximizing muscle growth naturally, his strategy works well. And he’s had a successful career after transitioning to the sport from cheerleading. This off-season cycle earned him a top ten placement amongst the most elite natural bodybuilders globally in 2021. At Natural Olympia 2021, Mike Pucci placed eighth in the Men’s Bodybuilding division.

As Mike Pucci said, it’s essential to allow your body enough time to build muscle naturally. Of course, this is imperative in natural bodybuilding since exploiting drugs is forbidden. However, drugs such as steroids and PEDs give your body a considerable enhancement in muscle mass, regardless of the possible health consequences.

Natural bodybuilding is safer than other bodybuilding federations. Like the International Federation of BodyBuilding and Fitness (IFBB) Pro, Leagues want their athletes to remain safe and healthy; however, they don’t drug test their athletes. So, of course, with no preventive measure in place, it’s challenging to regulate drug abuse.

However, the most significant natural bodybuilding federation – the INBA PNBA – utilizes professional athletes’ best drug testing standards – the World Anti-Doping Agency (WADA). Any athlete who disobeys these standards will never earn a chance to receive a multi-media contract with Generation Iron, INBA PNBA, and Iron Man Magazine. They’ll also be banned from competing and ridiculed if caught doping on the Hall of Shame.

Generation Iron is eager to see Mike Pucci’s progress over the next few years. We look forward to seeing you back on stage!